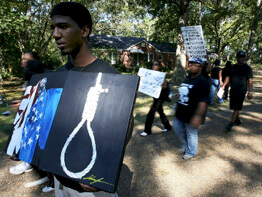 NEW ORLEANS – About 170 students from Xavier University of Louisiana were among thousands from across the country who converged on Jena, La., Sept. 20 for a rally protesting what they believe were excessive charges filed against six black Jena High School students for beating a white classmate last December.

Local authorities estimated the crowd in the tens of thousands. Members of the Xavier University student government association, who organized the three busloads of students who made the trip, said their presence at the rally was important because the case of the teens, who became known as the Jena 6, highlights what they consider to be unequal treatment blacks receive from the criminal justice system across the country.

“When I initially heard about it on Facebook, what happened to them seemed to be unfair treatment of some young African-American men,” said Gabrielle Jackson, 21, a senior psychology major from Houston and vice president of the student government association at Catholic-run Xavier.

“It just made me think. I have a younger brother, and it could have happened to him. You can’t allow unfair treatment of people of any race to just happen,” she said.

LaSalle Parish District Attorney Reed Walters, the lead prosecutor, defended his actions by saying it was incorrect to describe the beating incident as a schoolyard fight. The white student was knocked unconscious, but he was treated and released from a hospital and attended a school ring ceremony that night.

“The injury that was done to (the white student) and the serious threat to his survival has become less than a footnote,” Walters said.

The protesters complained that previous incidents of white students attacking black students did not draw similar charges. A few days after a black student sat beneath a “whites-only” tree on school grounds in August 2006, three hangman’s nooses were strung from the tree. No white students were prosecuted for committing a hate crime.

“Basically, the message is that you can’t keep your eyes blind to racism,” said Reuben Battley, 21, a senior biology major from Shreveport who is president of the student government association. “As students we should address it when things happen. A lot of people were calling this the new civil rights movement. I feel like this should make a difference.”

Jackson said she thought the rally, which included hundreds of college students, belied the perception that “African-American young people aren’t people who care, as people who are just living to die. A lot of us realize things aren’t correct, and we’ve got to vote and get our peers to vote to make a difference in the crowd.”

Jackson said the level of black-on-black violence and murder, especially in urban areas such as New Orleans, is unacceptable.

“People can no longer be afraid of the consequences of reporting the things they see because people might come after them,” she added. “We can’t let bad things happen and let innocent bystanders get hurt. We have to stand up to these people and let them know we’re not going to let them do this.”

Jackson said she felt good about her decision to go.

“As we got closer to going, there were all these threat of KKK rallies that could have scared people,” she said. “I feel good that students put their own personal things aside – their classes and homework – and gave a full day of themselves. Sometimes you think you’re hopeless. This reinforces the fact that there are young people who do care on campus about making a change.”