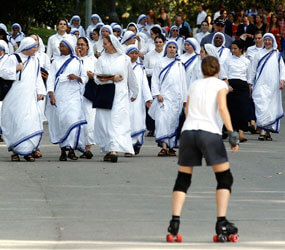 VATICAN CITY – While the Catholic Church seeks to help earthlings reach their true home in heaven, too often it treats its younger members as if they were from another planet, a top Vatican official said.

“Young people can find themselves in a lot of local churches on the margin of things, with a lot of people who don’t speak their language, who treat them as if they just descended from Mars,” said Archbishop Joseph W. Tobin, secretary of the Congregation for Institutes of Consecrated Life and Societies of Apostolic Life.

For many young Catholics, World Youth Day can be the one church event where they have the time, space and camaraderie they need to start pondering the way God wants them to live their faith in the church and in the world.

Added to the simple fact that they’re sharing an experience with hundreds of thousands of their peers from around the world, the event provides them with opportunities for liturgical and silent prayer and catechesis.

“Then within that they also meet young people who have entered into the dialogue we all have to have with our Creator, asking, ‘What would you have me do?’“ the archbishop said.

They will meet young people who already are finding “realization, freedom and joy in religious life or priesthood,” he said.

The Aug. 16-21 celebration of World Youth Day in Madrid will be the first international youth gathering to feature a special papal meeting with religious women under the age of 35. Some 1,500 sisters will have their meeting with the pope Aug. 19. The next morning, the pope will celebrate Mass with about 4,000 seminarians.

The gatherings, Archbishop Tobin said, are important for those considering a vocation to the priesthood or religious life as well as for those who already have embarked on their journey toward vows or ordination.

When the archbishop was superior of the Redemptorists, he said, a young member of the order told him what a similar youth gathering meant to him.

“He said for the first time in his young life as a Redemptorist priest he was in a room with other Redemptorists who have hair, and it’s not gray,” said the 59-year-old archbishop.

As for claims that World Youth Day is a seedbed for vocations, “I admit I was a little skeptical some years ago about whether it was a flash in the pan, and how do you carry it forth with some energy,” he said. But studies have shown that a significant portion of young men and women entering religious life cite the international event as an experience that contributed to their vocations.

The key thing, he said, is that there is follow-up and support after World Youth Day is over.

“That’s always the challenge with any really strong emotive experience. If that becomes your benchmark, it’s hard to duplicate that. Ask any young married couple when they’re facing a sink full of dishes, a sick baby and one is traveling or they’re unemployed. Somehow the high of their wedding day is hard to sustain,” he said.

“Loving is an art, but it’s an art that demands discipline and practice and, yeah, sometimes failure, but we get a whole lifetime to try to get it right,” the archbishop said.

Any contact any religious has with a young person “is a vocational moment,” because youths are “trying to sort it out,” to see where they fit in, he said.

Religious need to listen to young people, be clear about their own identity and invite the young to see for themselves if the community would be the right fit.
“That’s it in a nutshell,” he said.

In the Gospel of St. John, “Jesus doesn’t try to make a hard sell. He appeals to what motivates people: ‘What are you looking for?’ And then: ‘If you think you can find it with me, come and have a look.’ So the hook comes at the end,” when Jesus says, “Follow me.”

When a young person asks a religious community what it’s about, “it’s a mistake to say, ‘I don’t know, what do you want to be about?’ Any young person with any sense will say, ‘Sayonara, I don’t have to associate myself with you to be what I want to be about. I want to see if the gift you claim to be to the church speaks to my heart,’“ he said.

Young people don’t want the religious “to lower the bar, to soft-pedal the demands of the Gospel,” Archbishop Tobin said.

Usually, young people will consider joining a religious community only if they are asked, he said. “World Youth Day is a way to ask.”

Even in countries shaken by the clerical abuse scandal, there are still vocations to the priesthood and religious life.

“The optimist part of me says that on 9/11 a lot of people were running away from the twin towers, but there were some others who were running toward them” – the firefighters, police and other rescue workers, he said.

In churches rocked by the scandal, he said, the anger is “incandescent, and yet, there are still young people who are running toward it. It’s the crazy logic of losing your life to save it.”