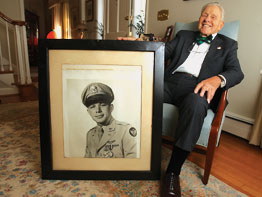 “Spinner,” everybody aboard the B-17 bomber called him, for they had seen him working the beads of his rosary between his fingers again and again.

Thaddeus J. Hense prayed his rosary often as a bombardier who flew about 25 missions in World War II, most of them over Nazi Germany.

“I was always saying the rosary until we got up real high and we had to keep our gloves on,” recalled Mr. Hense, 90.

With his strong build and smooth face, Mr. Hense could pass for decades younger. The parishioner of Immaculate Conception in Towson still works as a lawyer. He remains fit by swimming at the Towson YMCA, nearly a daily ritual for 50 years.

With Veterans Day on Nov. 11 approaching, Mr. Hense sat in his Ruxton home, recalling the war that he once believed would end war for good.

He found strength in his Catholic faith, praying aboard the bomber “Little Boy Blue,” and often attending daily Mass when at the base at Knettishall airfield near Thetford, England.

From October 1943 until March 1944, Mr. Hense served as a bombardier in the 388th Heavy Bombardment Group of the 560th Squadron of the Army Air Corps.

While airborne, he saw a handful of other planes, each carrying 10 men, shot down over Germany, so he and fellow crew members gave thanks they survived.

“We all felt that we were leading an enchanted life because somebody was taking care of us,” he said, “because some of these other crews, they had terrible losses. Some of them didn’t come back. Some of them came back shot up. It was just terrible. We were one of the few that came out unscathed. I would say it was a miracle myself.”

As the bombardier, Mr. Hense pulled the pins out of bombs over targets and fired guns from the front of the bomber during other parts of missions, which could last more than six hours.

As a gunner, he said, “I felt helpless. I could see the fighters coming at me, blinking their 20 mm cannons, and I thought, ‘He’s going to get me.’ But I was lucky nothing happened each time.”

He said he pitied the people killed by the bombs the plane dropped.

After his service, Mr. Hense returned to Baltimore to marry his sweetheart, Anne, his wife until her death five years ago. He has two daughters, a son, six grandchildren and three great-grandchildren.