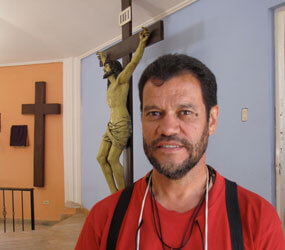 SALTILLO, Mexico – Martin Cantu prays the rosary every morning in the Christ the Prisoner Chapel, where he also attends Mass twice weekly. The deeply Catholic father of four spends his days sewing jackets in a prison workshop and passes much of his spare time reading the Bible and pondering the allegations of fraud that landed him in a minimum security prison.

Cantu, a slim man with a thick beard he grew for his portrayal of Christ in the prison’s annual Passion play, said he was wrongfully convicted in a hasty and unfair trial in which key evidence was ignored – a claim often made among people in prison the world over.

He’s making the best of a difficult situation behind bars in Saltillo, an industrial city in northern Mexico. Still, life is difficult.

“For me, this is hell,” he said of the two years he has been behind bars during an interview in the prison chapel.

An accountant by profession, Cantu was accused of fraud involving about $300,000 but denied any wrongdoing.

Such claims have received more attention in Mexico in recent months, however, especially since the hit documentary “Presunto Culpable” (“Presumed Guilty”) generated national outrage at a legal system in which guilt is assumed, transparency is minimal and due process is seemingly an afterthought.

As the documentary reported, “Being innocent isn’t enough to be free.”

Father Robert Coogan, prison chaplain in the Diocese of Saltillo, has seen the film and said he has heard similar expressions of judicial dissatisfaction for years along with horror stories ranging from the fabrication of evidence to the accused not understanding the charges against them.

Mexico’s prison system, he said, has worked in some parts of the country – such as the lockup in Saltillo, until recently – but not the judicial system.

Father Coogan points to Cantu’s case as an example in which the judicial process raised more questions than provided answers.

Cantu has not seen “Presunto Culpable,” but he can relate to the events it portrays.

The documentary focused on the retrial of a computer repairman convicted of manslaughter. The testimony of the lone witness in the case fell apart during the trial. The police, meanwhile, said they had no recollection of arresting the accused, Jose Antonio Zuniga. Evidence showed Zuniga had never fired a weapon. The prosecutor did little more than submit her case on a floppy disk.

Zuniga was convicted again, but he won on appeal after a judge watched film of the proceedings.

Cantu said his case unfolded in a similar way.

The film’s directors discovered that 93 percent of prisoners never knew a warrant for their arrest had been issued, as required by law. Cantu said he was arrested in Monterrey and held for trial without any advance warning.

The directors also found that 93 percent of those convicted never see a judge or their case files. Cantu said he never saw his case file, although he did ask about it.

Like the case presented in “Presunto Culpable,” he said key evidence that might have worked in his favor – bank records showing no improper transactions and a report saying his family lived within the means of his accountant’s salary, for example – were either omitted or ignored.

Equally horrifying as the portrayal of the legal system was life inside prison where Zuniga slept: under a bunk in an overcrowded and cockroach-infested cell.

Approximately 78 percent of families are responsible for feeding and caring for their incarcerated loved ones, according to the documentary.

Cantu’s family makes the 45-mile journey from Monterrey to visit him on weekends, bringing bags of food and basic necessities on every trip. The Saltillo prison lacks overcrowding problems and now features self-rule by inmates, according to the National Human Rights Commission.

Separation from his family and an inability to provide for them has been the most difficult issue for Cantu. He broke into tears when discussing his wife and children, later explaining that the financial hardship of being incarcerated forced a daughter to abandon university studies and might force his teenage children to drop out of a private Catholic high school.

“I would make three times as much on the outside,” he said.

“What little we have, we’re selling.”

Father Coogan said Cantu has held up reasonably well because of faith and family – things many inmates lack.

“It helps that he’s a devout person,” Father Coogan said. “Most people here don’t come from a religious background.”