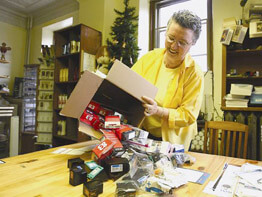 Though a new roof for Shrine of St. Alphonsus, Baltimore, can’t be constructed with discarded aluminum cans, cell phones, printer cartridges and copy machine toner units, it can be helped along by recycling those items.

With the help of several parishioners, church officials have been selling the items to local recycling centers and earned cash for the estimated $650,000 for the capital-improvement project. Roofing contractors are expected to begin work on the church within the next month.

“It’s a win-win situation,” said Irene Mann, director of development for the 162-year-old parish. “The parishioners can help the environment and help the church at the same time.”

More than $2,000 has been raised from the recycling program since it began in 2004 and though it’s only a fraction of what is needed to replace the deteriorated roof, Ms. Mann stressed every cent counts.

The recycling initiative was born several years ago when St. Alphonsus leaders began looking for creative ways to raise money for a new roof.

The response from parishioners was immediate and the bundles of discarded aluminum cans, cell phones, and printer cartridges began to flow into the rectory, Ms. Mann said.

Parishioner Pat Wentworth of Timonium has found the recycling program to be an inexpensive way for her to contribute to her church and involve many people in the worthy cause.

“My grandchildren get a kick out of saving the cans,” said Ms. Wentworth, who is also a member of the St. Alphonsus choir. “I also get my kids to collect, and the people at a company that I used to work for collect for me, too.”

Not only has the recycling program continued to thrive, but funds from the sale of the collected items have increased each year. Ms. Mann said.

“Once I started collecting from people, they just started automatically setting stuff aside for me,” said John Rutkowski, a parishioner who lives in Rosedale. “I work at Franklin Square (Medical Center) and people in several departments are always handing over outdated cell phones and used ink cartridges.”
Mr. Rutkowski also has a friend who works for the city of Baltimore and is a regular contributor of materials that would otherwise end up in the trash.

“One man’s trash is another man’s treasure,” he said. “It’s a great feeling knowing this is continuing to help my church and it’s that much less that will end up in our landfills.”

St. Alphonsus needs about $30,000 more to complete its capital campaign for the roof project, which will see the restoration of 16 spires that were removed from the top of the church in the 1920s, Ms. Mann said.

Once that roof project is completely funded, church officials will determine if they will continue the recycling program.

“The church will always need money, so I don’t see why we wouldn’t continue with this,” Ms. Wentworth said. “It doesn’t cost me, or the other parishioners, anything to continue with this and we all come here anyway, so it’s not out of our way to bring the stuff here.

“I’d rather collect this stuff for the church,” she said. “Environmentally, it’s always a big help. That becomes obvious when you continue to see trash on the street.”