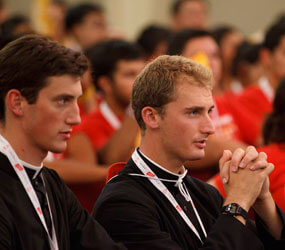 MADRID – As pilgrim Mark Horn mingled among hundreds of young people in an auditorium full of priests and women and men religious, the words he had just heard from Father Robert J. Barron cascaded through his mind.

It is through God that true happiness can be found, Father Barron told Horn and an auditorium full of English-speaking pilgrims during a vocations fair sponsored by the U.S. Conference of Catholic Bishops at St. Francis Borgia Parish in Madrid Aug. 17, part of World Youth Day activities.

Father Barron, who runs the Chicago-based Word on Fire ministry, was “spot on,” said the 24-year-old Horn of the Diocese of Rapid City, S.D.

“I thought the talk was what a lot of young people need to hear,” Horn said. “There’s no illusions. The way to happiness ultimately is about God and not me and does require sacrifice.

“Any person who’s serious about their spiritual life … does look to the cross for inspiration,” he added.

Horn was not alone in grasping Father Barron’s message that each person is called to a vocation in life that requires putting God first and ego second.

Stephen Yang of Arcadia, Calif., said the priest’s talk opened his mind to a new way of thinking about a vocation.

“The word vocation was always obscure to me,” he said. “I would hear it and think it means priesthood or consecrated life, something other than being married or single. But now I know fully that it includes both single and married life.”

Yang said the day’s events inspired him to seek out regular eucharistic adoration when he returns home so he could continue to discern his vocation.

The fair began with exposition of the Eucharist and prayer with Boston Cardinal Sean P. O’Malley. Activities unfolded throughout the day and included a concert as well as opportunities for young people to mingle with religious women and men.

Father Barron stressed to the young people gathered the importance of distinguishing between the “ego drama” and the “theo drama” – between putting self first or God first. He recalled St. Thomas Aquinas, who suggested the four primary ways that people choose themselves over God are wealth, pleasure, power and honor.

“Everybody in this room has an ultimate concern,” Father Barron said. “If it is anything other than God, your life is disordered, your life is off-kilter and you find yourself within the context of the ego drama.”

Vocation, he said, is about finding the place where a person can worship God alone, devoid of all distractions.

“Vocation is all about finding that place and erecting the altar to the true God alone,” he said.

Once free of the attachment to wealth, pleasure, power and honor, “you are ready to become a conduit of the divine life,” he said.

Father Barron suggested that the faithful use the image of Christ on the cross as an example to follow and as a reminder to let go of the things of the world.

“Love what he loved,” he said. “He loved doing the will of the heavenly Father. Because he’s free … that’s why he’s able to respond to the divine will. The exact same thing’s true of you.”