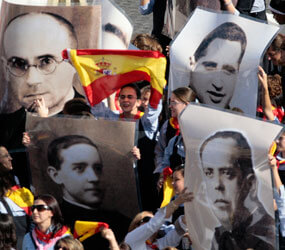 WASHINGTON – World Youth Day 2011 will open after the 75th anniversary of the beginning of the Spanish Civil War, a national event that many millennials may know little about, though it profoundly impacted the Catholic Church in Spain.

During the bitter three-year struggle between the Nationalist forces, led by Gen. Francisco Franco, and the established leftist Republican government, nearly half a million Spaniards were killed over ideological differences that had increasingly divided the country.

“Everyone was forced to take sides, whether they knew much about the causes of the war or not,” said Jose Sanchez, an expert on the Spanish Civil War and professor emeritus at St. Louis University.

“The church hierarchy was faced with the most intense crisis in Spain’s history and for the most part supported the Nationalist cause, primarily because of the anticlerical fury that occurred when the war broke out,” he said.

With the establishment of the leftist Second Spanish Republic in 1931, discriminatory laws against Catholics were put in place – nationalizing church properties, instituting obligatory public education, which would ban nuns and monks from teaching by 1933, and forbidding public displays of Catholicism. Convents were burned in Madrid, Malaga, and elsewhere in the early 1930s, followed by the dissolution of the Jesuits and sporadic killings of religious.

From 1936 to 1939, thousands of Catholic institutions – churches, monasteries, convents and schools – were burned and destroyed. Close to 7,000 bishops, priests and nuns were martyred, along with thousands of laity for the simple fact they were Catholic. Carrying religious objects, such as a medal, crucifix or rosary, was enough of a reason to be killed.

Nearly 1,000 of the Spanish Civil War martyrs have been beatified during the pontificates of John Paul II and Benedict XVI.

Auxiliary Bishop Rutilio J. del Riego of San Bernardino, Calif., grew up in a small northern province in Spain. Born a year after the war ended, Bishop del Riego told Catholic News about the challenges growing up in a post-civil war Spain.

“Even after the war you knew who was on which side in the village,” Bishop del Riego said. The bishop had two uncles who fought in the civil war, both on the side of the Nationalists, “because that’s where we lived,” he said. He was named after his father’s brother, who died in the war.

Bishop del Riego said it took time for a country torn by contrasting ideologies to find healing and unity again. Nevertheless, a strong secularism and anti-clericalism still pervade the country, the bishop said.

According to a recent study by Georgetown’s Center for Applied Research in the Apostolate, only 19 percent of Spanish Catholics attend Mass weekly. The numbers have waned especially in the past 15-20 years.

“I have seen that process and it has pained me,” Bishop del Riego said. “I have verified it every time I have gone home (to Spain). It is a different world.”

Pope Benedict commented on the crisis of secularism in Spain on his last trip to the country in 2010. He made a trip to Santiago de Compostela last November.

“Spain has always been, on the one hand, a foundational country for the faith,” the pope said in a press conference aboard the papal plane. “But it is equally true that in Spain a laicism was born, an anti-clericalism, a strong and aggressive secularism, as we saw precisely in the 1930s, and this dispute, more, this conflict between faith and modernity, both very lively, occurs today too in Spain.”

Despite the challenges it faces, Bishop del Riego said he maintains hope for the church in Spain.

“Although I know we need to do the best we can, I am not in panic,” the bishop said. “In the great scheme of things … the one who is in charge is God, the Lord of history.”

One hopeful sign can be seen at one Spanish convent. Iesu Communio, a community formerly associated with the Poor Clares of Lerma, two hours north of Madrid, has experienced a steady increase in vocations since the 1980s.

Most of the women entering are in their 20s and early 30s and have college degrees, some are doctors, lawyers, engineers and the like. A large number of them have said their vocations were inspired at or through World Youth Day.

This year’s World Youth Day in Spain is set to kick off Aug. 16 with a Mass in Madrid’s Cibeles Square. It is the 12th international gathering since the initiative was instituted by Blessed John Paul II in 1985. Pope Benedict XVI will arrive in Madrid Aug. 18. It will be his third visit to Spain.

That 75 years later Catholic youths from across the world will be celebrating their faith openly in the streets of Madrid this August, where at least 4,000 clergy were martyred during the civil war, is perhaps another sign of hope for the Spanish church.

Bishop del Riego will be traveling to Spain with more than 250 youths and families from the San Bernardino Diocese for what will be his first World Youth Day.

He said he has “no doubts” that the pope and Spanish bishops hope the gathering will help foster a resurgence in the Catholic faith among Spanish youths.

“I think it is an excellent opportunity,” he said.