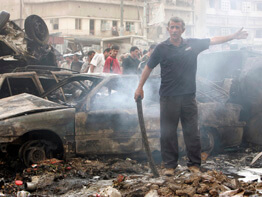 ROME – The international community must do more to welcome and support the thousands of refugees daily fleeing the “horrific violence” in Iraq, a Vatican official said.

“The world is witnessing an unprecedented degree of hate and destructiveness in Iraq,” which not only destroys the “social tissue and the unity of Iraq,” but is exerting “a widening deadly impact” on the whole Middle East, said Archbishop Silvano Tomasi.

The Vatican’s representative to U.N. and other international organizations in Geneva spoke there April 17 at an international conference addressing the humanitarian needs of Iraq’s refugees and internally displaced people. Catholic News Service in Rome obtained a copy of his text.

The archbishop said history has shown that the international community can be effective in creating “durable solutions” to the massive displacement of peoples.

Now nations must help Iraq’s refugees and internally displaced people by providing “a coordinated, effective and generous response,” he said.

“This is not the time to look at technical definitions of a refugee,” he said. More countries need to open their doors to greater numbers of displaced Iraqis “so that pressure within the region may be alleviated on a short-term basis.”

Some 2 million Iraqis are displaced within their country, while nearly 2 million more people have fled the country since the U.S.-led war started in 2003. Between 40,000 and 50,000 Iraqis are leaving their homes each month, according to U.N. statistics.

At present, Jordan and Syria have absorbed much of the wave of Iraqi refugees, resulting in increasing pressure and strain on their own economies and social structures.
The International Catholic Migration Commission also participated in the April 17-18 conference, sponsored by the U.N. High Commissioner for Refugees. This migration commission works with migrants, refugees and other uprooted people in 30 countries around the world.

The Catholic commission echoed the Vatican’s calls for nations to increase support of humanitarian aid to those displaced by the conflict and to guarantee refugees protection from being involuntarily sent back to their home countries if their lives or freedoms would be at risk.

The commission also called on the United States and Europe to welcome more Iraqi refugees for resettlement in their countries and asked that all Iraqis be guaranteed the right to “genuine access” to asylum processes.
The commission’s policy director, John Bingham, told Catholic News Service by phone April 18 that Chile and France opened their doors “to the many (Iraqi) refugees knocking outside.”

He said conference participants widely agreed that, while a political solution was needed for the long term, greater security and continued humanitarian aid were urgent to save lives and improve the dire living conditions inside Iraq and for Iraqi refugees.

Archbishop Tomasi said it was time for more countries to work together to “make conditions in Iraq and in the whole region conducive to a decent and sustainable coexistence among all its citizens.”

The ethnic and religious cleansing against Christians and other religious minorities by radical groups in Iraq calls for special attention, he said.

In the face of increased threats, large numbers of Christians have been abandoning their homes, but religious and ethnic diversity in communities must be protected, he said. He added that such diversity contributes to “a democratic experience” and can link the community to the rest of the world.
While some of the threats Christians face involve kidnappings and direct violence, others are more subtle, according to an April 18 news report by AsiaNews, a Rome-based missionary agency.

For example, Chaldean Auxiliary Bishop Shlemon Warduni of Baghdad, Iraq, told the news agency that many Christian churches are now being forced to remove the crosses from church domes. It is just one of the newest ways Christians are being pressured to hide their faith or convert to Islam, AsiaNews reported.

Another worrisome development, said the agency, is U.S. troops’ recent occupation of the Pontifical Babel College for Philosophy and Theology in Baghdad. The university buildings had been empty since January after a lack of security and increasing violence in the city prompted church officials to move the college and its seminary to northern Iraq.

The U.S. military decided to “forcibly occupy” the buildings for use as an observation outpost, AsiaNews said, although U.S. officials reportedly said their presence there would be temporary.