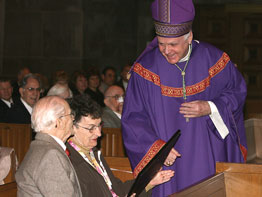 It was during the Great Depression when Virginia said “hi” to Sebastian LaRossa at a dance.

She left to say hello to the bandleader, and when she walked back, Sebastian said to her, “You know I’m going to marry you.”

“I said, ‘You’re nuts,’ ” Virginia recalled, and then went to laugh with her friends about the brash stranger.

But after that, they danced together at every dance in their Brooklyn, N.Y., neighborhood. He proposed to her in the balcony of the local movie house.

“I’m a very religious person,” Virginia said. “I liked him, but I didn’t like him. I wasn’t sure about marrying him so fast.”

She had always prayed to St. Theresa and given roses to the saint.

Sebastian came to call – and brought her a corsage of roses.

They’ve been married 73 years and this year, Sebastian, 96, and Virginia, 93, from Sacred Heart, Glyndon, were honored as the longest-married couple in the Archdiocese of Baltimore. Although unable to attend the ceremony – both use wheelchairs and live in the same nursing home – they were delighted to share their story.

Their early years were hard. In the depths of the Depression, they had no money for a honeymoon, just a boat ride up the Hudson. They moved in with her mother while Sebastian desperately hunted for work. Finally, he got a job working for the Works Progress Administration, first picking up trash and then loading bags of onions onto freight cars. The onion bags scoured his arms.

“We had terrible hardships,” Virginia said. “But whatever they were, we accepted them.”

When the Depression ended, Sebastian worked for Prudential Insurance Co. and Virginia, a talented seamstress, found work as an interior decorator. They were always involved in the church and busy raising a son and daughter.

Together they endured the greatest loss of all – they lost their 23-year-old son to cancer.

Throughout the hardships, their joy in each other never dimmed.

Several hundred people attended the Mass, and couples from throughout the archdiocese renewed their wedding vows.

Archbishop O’Brien said World Marriage Day “is a true success story,” and the couples in the pew were a testament to the success of marriage.

In his homily, he spoke about the disciples seeing Jesus transfigured, and how they wanted to stay there with Jesus but had to return to the world. He compared that to the intoxication of love at first sight, but then couples come down to earth “to face a world often hostile to marriage and family.”

But those present, he noted, have rejected concepts such as no-fault divorce “in favor of unconditional love.” He noted, too, that couples tried their best to pass that on to their children.

The longest married couple able to attend was Theodore and Frances Beidronski from St. Brigid, Canton, who have been married 71 years. Archbishop O’Brien, smiling broadly, presented them with a proclamation.

The second-longest married couple after the LaRossas is William and Mary Eckhard from St. John, Westminster, who have been married for 72 years.

Although it’s been 73 years since he married his bride, Sebastian LaRossa still remembers the young girl sauntering off to chat with the band leader.

“I liked the way she walked,” he said. And so they stepped into a lifetime together.