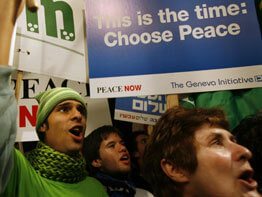 As key leaders from Israel, the Palestinian territories, Saudi Arabia, Syria and other nations gathered in Annapolis for the Nov. 26-28 Middle East peace conference and related meetings, local Catholic leaders said they were hopeful the meetings would trigger further discussions for making a lasting peace in the Holy Land.

Peace is attainable, they said, but it will take assertive leadership from the United States to make it a reality.

“I’m guardedly optimistic in the sense that I’m always happy when there’s some kind of negotiation going on in the Middle East,” said Bishop Denis J. Madden, Baltimore’s urban vicar, who previously served as associate secretary general of the Catholic Near East Welfare Association and director of the Pontifical Mission for Palestine office in Jerusalem.

Bishop Madden said the lack of strong leadership from the United States in recent years has been a contributing reason the peace process has stalled. He is hopeful the U.S.-led Annapolis meetings will change that.

“I think it’s very important for the U.S. to show seriousness about all of this,” said Bishop Madden. “There’s a need for an outside party to provide leadership, as long as it’s going to be even-handed.”

Bishop Madden said there is general consensus about what steps are needed to achieve peace. Israelis would like greater control of the terrorists who pose a threat to security, he said, while Palestinians are looking for a cessation of Israeli settlement building, the return of land and freer travel.

Bishop Madden led a 12-day October pilgrimage to the Holy Land during which his group met with a variety of government leaders, representatives of local organizations, educators, religious leaders and others.

“The Israelis and Palestinians can and do live in peace,” he said. “We have extremist groups that always topple the equilibrium, and when there’s an episode everything comes to a screeching halt.”

Christine Tucker, a leader from Baltimore-based Catholic Relief Services and a parishioner of St. Louis in Clarksville, participated in the recent pilgrimage while also conducting CRS business in the Holy Land. She agreed that there are many on both sides who know how to attain peace but that the political process needs to be jump-started.

“I think there is recognition that peace for one is peace for the other,” she said.

Ms. Tucker said many on both sides recognize that a two-state solution for Israel and Palestine is key to any peace process. She is concerned about what she called the “humanitarian crisis” in Palestine that is complicated by strict travel restrictions imposed by Israel. There are 38 CRS staff members working in Palestine, providing food and other relief support, she said. Checkpoints and restrictions “put great difficulty on our ability to deliver assistance,” she said.

“One can travel freely throughout Israel and there’s access to jobs, healthcare, education and so those same elements that are part of daily life are simply not there on the Palestinian side,” she said.

Ms. Tucker said it is important for American citizens to lobby their senators to pass Resolution 321, a measure that encourages President Bush to pursue a “robust diplomatic effort” in the Holy Land and to make a two-state solution “a top priority.”

Pope Benedict XVI said he hoped the Annapolis conference, held at the U.S. Naval Academy, would help Palestinians and Israelis reach a “just and definitive solution.”

The pope endorsed the U.S. bishops’ call for prayers for the success of the conference, saying prayers were needed so that negotiators will have the “wisdom and courage” to take real steps toward peace.

He said the Palestinian-Israeli conflict “for 60 years has been bloodying the Holy Land,” causing “so many tears and so much suffering among the two peoples.”

The Catholic Review went to press as the conference was beginning.
Catholic News Service contributed to this story.