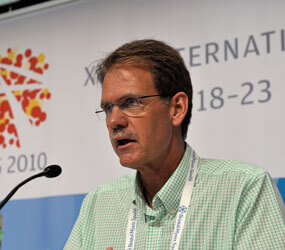 VIENNA – After three decades in which the AIDS pandemic has ravaged lives and communities around the globe, those struggling against the disease at the grass roots say AIDS continues to present difficult challenges to the Catholic Church.

“AIDS is challenging the church to look once again at the life of Jesus, who was constantly on the margins of society, bringing people at the margins back to the center,” U.S. Maryknoll Father Richard Bauer told Catholic News Service.

“Many of the new HIV infections are found among the most marginalized people, so our response to the Gospel today isn’t to reach out to the tax collector and leper, but rather to the (intravenous) drug user in the Ukraine or the woman in commercial sex work who’s being trafficked. They are calling the church to no longer be comfortable only in parish settings. We’ve got to go to the margins as Jesus did,” said Father Bauer, executive director of Catholic AIDS Action, a program of the Namibian bishops’ conference.

The church has preached behavior change as a prevention method for AIDS, and a nun who works with trafficked women in Eastern Europe said that message can have larger implications.

“Behavior change is possible, but I’d like to see it happen on a deeper level, more than just as a response to HIV and AIDS. If women could have greater say in matters related to their own sexuality, and a greater say in how they create their relationships and get out of a vicious circle of poverty, dependency, abuse and disease, we can accomplish a lot,” Sister Silke Mallmann, a member of the Missionary Sisters of the Precious Blood, told CNS. “Often to our ears behavior change sounds restrictive, a list of the things we’re no longer allowed to do. But if you formulate it differently, it can be very empowering.”

Sister Mallmann, a German psychologist now working in Austria, worked for several years with an AIDS program in South Africa. She praised decisions by several African bishops’ conferences to adapt church teaching to the unique challenges of the pandemic.

“I appreciate the stand the Catholic Church is taking on discordant couples, saying condom use is OK if one is infected, in order to protect the other,” Sister Mallmann told CNS.

“I firmly believe that condoms aren’t the answer. If you only go and tell people to use condoms, it won’t work. But if you’ve got a 14-year old girl who is HIV-positive because she was forced to engage in sex at such an early age, and she’s crying her heart out, I would tell her to use a condom and to use it in good conscience, to protect someone else and to protect herself,” she said.

“I’m not promoting condoms as a blanket solution to the problem of AIDS. It doesn’t work. It doesn’t work in South Africa where you can get condoms on every street corner. We don’t promote condoms, but we give people full and correct information about prevention. There’s abstinence, fidelity, and there are condoms or Femidoms. Don’t hide the truth about them. Share what the church says about them, that we don’t appreciate their use, but they are safe. And if you in your own conscience feel that’s what you should use, then they are an option,” Sister Mallmann said.

Father Bauer said experience has shown that only a comprehensive approach to prevention will work.

“Every time any activist group says, ‘This is the silver bullet, this is the answer,’ after a few years go by they say, ‘Oh, I guess it wasn’t.’ This is whether it was abstinence only or condom only; either end of the spectrum is incomplete. The real answer is about comprehensive services and changing not just the individual’s behavior but changing the behavior and norms of the society,” he said.

Sister Mallmann said the continuing AIDS crisis also challenges the structure of the church, where only priests and deacons administer sacraments.

“People who are sick need the anointing of the sick and the sacrament of reconciliation. When I was counseling people (in South Africa), we dealt with guilt, and they would release their whole story. We got to the point where they would benefit from a sacrament. It’s not good enough for me to say it’s OK and God will forgive them. That will work in Germany or the U.S. where people don’t know the catechism anymore. But it won’t work in countries where people have been trained in the catechism. So I have to tell people to go up the street and find a priest and tell him the same story again,” she said.

“At the only remaining Catholic hospital in South Africa, there was no permanent priest, so whenever someone is going to die we have to phone around looking for one to rush in. People in Africa love rituals, and while we can pray with people for healing, we can’t offer the deepest gift the church has to offer, which are the sacraments,” she said.

Father Bauer said that cutbacks in global funding for AIDS programs challenge the church to document its work in some new ways.

“Faith-based organizations have been our own worst enemies. Many haven’t been good at presenting evidence-based findings. We were there doing the care and compassion, but because our faith dictates humility, we haven’t tooted our own horn,” he said.

“Yet one good thing to come out of these last years is that I’ve learned the evidence-based language, so now I can talk to you about quality of life indicators for 5,000 home-care clients, or the percentage of children who receive services and what percent of them attend school, or the outcome indicators of young people who delay first intercourse and stay in school. We’re getting better at tooting our own horn and getting good data,” Father Bauer said.

Even with the right evidence, money for AIDS treatment and prevention is going to be harder to come by in the near future. U.S. Monsignor Bob Vitillo, a special adviser to Caritas Internationalis on HIV and AIDS, said the church should cooperate in the push for more efficient use of AIDS funding.

“We need to look at combining health programs, so we don’t have parallel programs for HIV and TB and malaria and so on. We can do it smarter. And we can do the study to show the evidence that our programs are effective. But we’re still going to need the money. Faith-based organizations and civil society groups can’t do this on their own,” he told CNS.