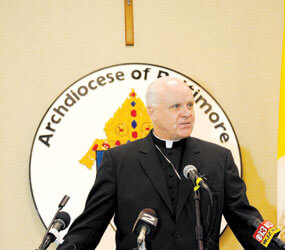 When Pope Benedict XVI named Archbishop Edwin F. O’Brien Pro-Grand Master of the Equestrian Order of the Holy Sepulcher Aug. 29, he ceased being archbishop of Baltimore the same day. But he’s not going anywhere soon, because the pope gave him the additional title and responsibilities of apostolic administrator of the archdiocese until his successor is named.

The title, the archbishop said at a news conference the morning of the appointment, gives him many of the same duties he had as archbishop. “I am grateful to the pope for allowing me to serve in this dual role until my successor is installed, which will ensure that the many important initiatives under way in the archdiocese continue without interruption, even as I begin serving the church in my new role.”

He said when Cardinal Tarcisio Bertone, Vatican secretary of state, called him while he was in Rome Aug. 17 to inform him that the pope wished to appoint him to the new post, he expressed that it would be a sacrifice to leave Baltimore. The archbishop said Cardinal Bertone acknowledged that, but said in his new role he could “have a universal pastoral effect and still serve the church in the United States and your beloved Archdiocese of Baltimore.”

aid in his new role he could “have a universal pastoral effect and still serve the church in the United States and your beloved Archdiocese of Baltimore.”

The archbishop said that the next day he wrote a letter to Pope Benedict accepting the appointment, and asking that he be allowed to remain as apostolic administrator until a successor is named, a request which was confirmed last week.

“In simple terms,” he said, “that means doing everything I’m doing today, except making any decisions that might impinge on my successor.”

There are processes in place for selection of an administrator upon the vacancy of a see – when a diocese or archdiocese does not have a bishop through the death, resignation or transfer of its residential bishop. In most cases, the college of consultors, a group of priests, would elect a diocesan administrator, who fulfills certain functions until a new bishop is appointed and installed.

Diane Barr, chancellor of the archdiocese, said that an apostolic administrator is a diocesan administrator who has been appointed by Rome. As Archbishop O’Brien noted, administrators, diocesan or apostolic, cannot do anything that would unduly commit their successors. However, Barr noted, “Anything that has started can continue.”

So, for example, the parish planning process that Archbishop O’Brien began will continue, although the document that might have been issued at the end of the listening phase will likely be postponed.

“The current local planning in the clusters under the vicar bishops (Bishops Mitchell T. Rozanski and Denis J. Madden) can and should continue. There’s lots they can do on their own,” Barr said.

No permanent appointments can be made, Barr said, so no pastors can be appointed, but Archbishop O’Brien can appoint administrators for parishes, and other new appointments are also temporary.

In the meantime, the process for choosing the 16th archbishop of Baltimore is under way. Archbishop O’Brien said that he has impressed on those at the Vatican the urgency of filling the vacancy as soon as possible, since this is a major archdiocese with so many initiatives in progress.

No one knows exactly how long the process will take. It will likely be at least six months; it could be longer.

The Apostolic Nunciature in Washington, the Vatican’s “embassy” or representatives in the U.S., will ask the archdiocese for particular information about the church and its ministry. Fortunately, Barr said, much of that information was compiled recently for the “quinquennial report,” a thick summary of ministerial activities submitted to the Vatican every five years in advance of each bishop’s visit to the Vatican and the pope. The bishops of this region have not met with the pope since 2004 and are expected to have their next “ad limina” (“to the threshold” of Peter and Paul) visits sometime in 2012.

Broad consultation within the diocese and with a number of sources is encouraged with regard to the needs of the diocese, but not the names of candidates. These parts of the process are conducted under pontifical secret; those involved cannot even reveal the contents of the survey or that they have been queried. That process alone usually takes three to six months, Barr and others said.

From those criteria, the nuncio builds a list of potential candidates, and then narrows the list to about 20.

The bishops in each province in the country normally meet annually to discuss names of those in their region who might make good bishops or fill expected vacancies. However, no one expected the Baltimore See to be vacant for a few years.

Since the nunciature plays an important role in this process, the recent death of Archbishop Pietro Sambi, Vatican nuncio to the U.S., may further complicate or lengthen the process.

The nuncio submits a list of three nominees (a terna) for bishop of a diocese to the Congregation for Bishops in Rome, which does its own homework before submitting a terna (sometimes the names the nuncio submitted, sometimes not) to the pope. The pope decides within a few days whether to accept the recommendation of the nuncio and the Congregation for Bishops. Once he makes his decision, the congregation notifies the nuncio, who makes the call to the one who will receive the appointment. If he accepts, arrangements are made for the announcement. Archbishop O’Brien remains apostolic administrator until the new Archbishop of Baltimore is installed.

“I hope we get someone who enjoys us,” Barr said, “someone who’s open.”

“That’s one thing about Archbishop O’Brien – he’s always been open and willing to bring in people with new ideas.”