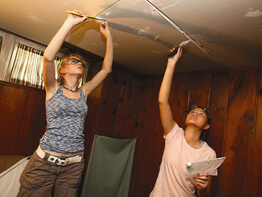 The playground across the street from St. Martin’s church, Baltimore, was overgrown with weeds, the swings were broken, glass lay strewn all over the ground and many of the benches were damaged until a group of youth from the Baltimore/ Appalachia Work Camp arrived the week of June 17-22.

A total of 160 youth and adult volunteers spent two weeks at 36 different sites around Baltimore and in the Appalachia area of West Virginia, doing manual labor for those who need help.

“We are helping people have a better quality of life,” said Mae Richardson, one of the leaders for the camp and the youth minister for Sacred Heart, Glyndon. “It’s an opportunity for our young people to give back. It’s important for young people to be involved in their community.”

As the group of young people worked to clean up the playground many of the neighborhood children came out to see what was going on and see if they could help. As the week went on the children did less helping and more playing but their laughter lit up the faces of everyone painting, mulching and building.

“All the while we have been creating community by playing with the young children,” said David Mueller, 18, from Holy Trinity, Glen Burnie. “It gives them a little piece of their childhood that they may not have experienced.”

The youths fixed the broken benches and built tables surrounding the playground. Anna Mahr brought lollipops and sidewalk chalk for the children to play with and she stood back in awe of what a great environment they had created for the children.

Jimmy Crawford, 17, who worked on the playground all week, was asked by a woman in the neighborhood if he would fix a door for her. When the job was done and the door closed properly, the look of gratitude on her face was payment enough for Jim.

“It’s the little things like fixing a swing and then watching a little kid come to swing on it, that matters,” said Jim with a smile. His friend Mike Shaughnessy, from the Catholic Community of St. Francis Xavier, Hunt Valley, added, “You see the grace of God in everything and every situation.”

Marlene White’s backyard was in need of weeding and her water damaged basement ceiling needed to be replaced. She was so grateful to see a group of young people at her door to help her with her home repairs.

“I’m still in shock. My hill looks beautiful,” said the St. Martin parishioner. “They have been a great group of people and it has been nice to have them around.”

Sydney Byrd, 14, said her parents wanted her to have this experience of helping others and getting to know the different parts of the city. She said she doesn’t have much arm strength but she helped plant flowers in the backyard, paint and spackled the new ceiling.

“I learned basic things that I wouldn’t have learned anywhere else,” said Elli Hartig, 16, from Our Lady of Grace, Parkton. “As able bodied people it’s our cross to bear to help others.”