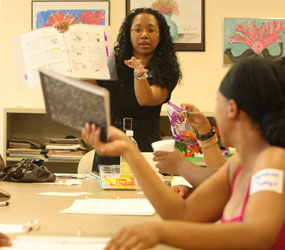 My Sister’s Place Women’s Center in Baltimore is equipping its clients with the financial know-how to secure stable and more confident futures. The center is accomplishing its goals for the financial security of women through the offering of a financial literacy class in partnership with Baltimore CASH Campaign.

“MSPWC decided to offer this class as another way of helping our women become self-sufficient and independent,” said Sister of Notre Dame de Namur Anne-Louise Nadeau, case management supervisor for My Sister’s Place. “Participants must have a case manager at MSPWC who will refer them to the class,” which it was agreed would run four times in 2010.

Lily Boyd, a client and volunteer at My Sister’s Place, said, “A member of the staff here told me about the financial class, because I’ve had some rough times.”

Boyd, who attended the class’s July session, said, “It’s a lot of good points, especially with the budget, because sometimes, for me, because of the income I receive, it’s really hard to budget, but going through the class, it shows you a lot of different ways that you can pull back on some things that you don’t need, so it’s a big help.”

The first three sessions of the series, which consists of four classes each held Friday afternoons from 1 to 2:30 p.m., ran in January, April, and July; a fourth will run in October.

Sister Nadeau said the class is also a required part of the “Families that Work” program.

Sister Nadeau explained the classes in the series: Week one covers budgeting and money management. One participant said, “I remember … talking about when we make a budget to … keep it in our wallet so that when we’re spending, when we pull our money out, we would pull out our budget, and that would kind of keep us from doing a lot of impulse spending.”

She said, “After attending the three workshops, clients are required to schedule a 30-minute one-on-one counseling session with a financial coach to discuss how to personally apply the information and to confidentially ask questions regarding personal finances.”

Boyd was an engaged participant in the July 16 workshop, offering plenty of comments in discussion about banking, saving and credit. As part of this workshop, teacher Copeland gave the group of some 15 women a chance to problem-solve through an activity in which they had to develop ideas about how a woman, “Cheryl,” could cut down expenses in order to afford a vacation with her family.

Among other things, the activity described Cheryl’s office as being “in a downtown shopping area,” relating that “(Cheryl) likes to stop in at her favorite clothing store during her lunch break” and “sometimes … makes an impulse buy using her credit card.”

Boyd suggested that Cheryl could start packing her lunch in order to avoid going out during her lunch break, thus avoiding the temptation to buy clothes.

Copeland also showed the women a video addressing banking, ATMs, check-writing, and the evils of check-cashing, among other banking and saving issues.

And the women shared personal stories, one woman describing a hairy situation with which she is still dealing involving a mistake on the part of a company that gave her a payday loan.

“We teach the classes, but we also evaluate the women using surveys at the beginning of the series, at the end of the third class, and a few months after the series of classes has ended,” Copeland explained. “We’re trying to see what impact the classes have had on the clients and their daily lives.”

Those surveys have so far conveyed positive results. “The women do express feeling more knowledgeable and confident,” said Copeland, “more willing to save and be thoughtful about their spending.”

One woman responded on a survey that she “learned more about how to budget, and also, today taught me about taxes, things I didn’t know I could do.”

Another said the class has not only helped her to be more disciplined in her spending but also to “be a better parent.”