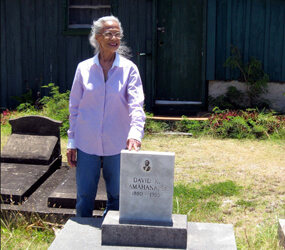 KALAUPAPA, Hawaii – As Sacred Hearts Father Christopher Keahi handed out new “St.” Damien prayer cards in St. Francis Church in anticipation of the priest’s Oct. 11 canonization in Rome, a guest with a most special connection to Hawaii’s first saint sat in a middle pew.

Emma Kamahana Dickerson accepted the new card with gratitude and a rush of memories. Her father, David Kamahana, was just 13 years old when he was diagnosed with leprosy and sent to Kalaupapa in 1888. There he came to know Father Damien. Many years later, David Kamahana would testify as a witness for Damien’s cause for sainthood.

For Dickerson, who now lives in Pennsylvania, the trip back to Kalaupapa was a reunion of sorts. To make sure that this precious chapter of family history would be remembered and passed down, she brought along three daughters and a granddaughter. For two days, they became part of Kalaupapa where the residents welcomed them like the ‘ohana’ (family members) that they will always be.

“David Kamahana’s daughter? Oh my goodness!” cried Norbert Palea, who remembered her father and the general store that he operated in Kalaupapa for many years.

Dickerson’s story began on May 25, 1924, when she was born at the infirmary of Bishop Home, the complex for girls and young women at Kalaupapa run by the Sisters of St. Francis. Dickerson was the youngest of nine children born to David and Alana Ahlo Kamahana. When she was just two days old, one of Alana Ahlo’s brothers, Abraham Ahlo, took baby Emma home to Honolulu to become part of his family.

She did not know of her birth parents until she was 8 or 9 years old.

“I called my ‘hanai’ (adoptive) father ‘Papa,’’’ said Dickerson. “When he started telling me this, I was amazed. Oh! Papa, why are you telling me this now? ‘Because you have to know as you grow up,’ he says. ‘You have to know why you were brought here. Your mother said I should tell you.’“

By that time, Dickerson’s birth mother had died and was buried in the family plot next to two daughters who had died very young.

Accompanied by her adoptive sister Rose, young Emma traveled to Kalaupapa by ship and was escorted by a policeman to a place for visitors.

“My father came to see me, but there was a wire fence between us and we couldn’t touch,” she said. “He told me he wanted me to come see his store. Later on, I realized he must have had a lot of push – a lot of influence – to have me come to visit him.”

The Kamahana Store was just becoming a Kalaupapa institution. The new cement structure had been built in 1932; David Kamahana had his full name emblazoned across the front in raised letters, obviously proud of his accomplishment.

“He had everything in his store – candies to clothing to caskets,” remembered Dickerson with a laugh. “It was a general store, he bought the clothes from Montgomery Ward, but he also had a restaurant and a barbershop. He told me I could have anything I wanted.”

Later in life, Kamahana left Kalaupapa for Hale Mohalu, the residential complex on Oahu for people affected by leprosy. He eventually went to live with one of his sons and died in 1955.

For Emma Kamahana Dickerson’s daughters and granddaughter, this summer’s visit was an emotional journey. The daughters – Yvonne Graham-Solem, Thelma Dickerson and Barbara Ahlo Martin – had been to Kalaupapa before, although it had many years since their last time. But for granddaughter Tina Paparo Ciarrocchi, it was her first time in the land of her great-grandparents.

At one point, Ciarrocchi was overwhelmed with tears.

“What does this visit mean? I can’t even describe it,” she said. “It means everything to me. This has been the opportunity of a lifetime.”

The Kamahana women received Communion from Father Keahi at St. Francis Church and later got the “deluxe” tour of Kalawao from Kalaupapa resident and retired painter Boogie Kahilihiwa, who remembered David Kamahana as a man who “loved his fish and poi.”

Over dinner at the Kalaupapa visitors’ quarters, the Kamahana descendants talked about how the legacy of David and Alana Kamahana had become the strongest thread in their lives.

“This is such an amazing story,” said Thelma Dickerson. “Our grandfather is not a world-famous man, but in his own community he was very successful. He was an entrepreneur who found his niche. He was an incredible man, really. My sisters and I are proud to call him our grandfather.”