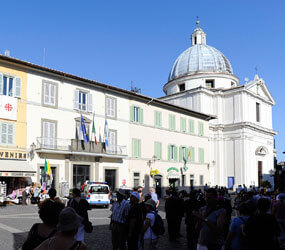 VATICAN CITY – Pope Benedict XVI officially began his summer vacation July 7, taking a helicopter from the Vatican to the hilltop town of Castel Gandolfo, less than 15 miles south of Rome.

“One can find everything here: mountains, the lake, the sea, a beautiful church with a restored façade and good people,” the pope said as soon as he arrived. He was speaking from the balcony of the papal villa to a crowd that had gathered to welcome him to the small town.

“I am happy to be here. Let’s hope that the Lord will give us a good vacation,” he said.

For the second year in a row, Pope Benedict has declined invitations to spend a couple weeks of the summer in the Italian Alps. He will be based at Castel Gandolfo until the end of September, said Jesuit Father Federico Lombardi, Vatican spokesman.

For the month of July, the pope has suspended his Wednesday general audiences, but he will pray the Angelus each Sunday with several thousand people who gather in the courtyard of the villa at Castel Gandolfo.

Father Lombardi told Vatican Radio July 7 that skipping an Alpine vacation means reducing organizational and security headaches and costs for both the Vatican and the Italian government.

In addition, he said, Castel Gandolfo has “the advantage of being a familiar location, prepared and equipped for the presence of the Holy Father, a quiet place, where even the altitude is suitable -cooler than Rome, but not particularly high – it has gardens to walk in” and is conducive to prayer and the pope’s cultural work, “both particularly dear to him.”
The spokesman said the pope plans to prepare his speeches for World Youth Day in Madrid in August and for a trip to Germany in September. He also wants to continue working on the third and final volume of his “Jesus of Nazareth” series.

The first volume was published in 2007 and the second came out in March. Father Lombardi said the pope, who has already begun writing the third volume, expects it to be shorter than the first two and “a bit different in nature and approach” since it will cover Jesus’ infancy and childhood, for which there is very little information in the Gospels.