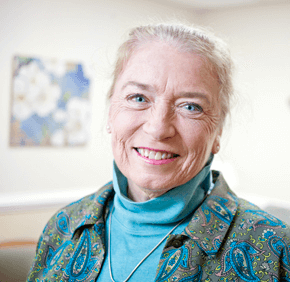 By Maria Wiering
mwiering@CatholicReview.org
When Cara Enny was pregnant with her first child, she wanted to have a natural birth without medication or other medical intervention, and chose to deliver with a midwife rather than an obstetrician.  When it came time for the birth of her second child on June 29, the Baltimore teacher returned to that midwifery practice, Kathleen Slone CNM & Associates.
“They were wonderful,” said Enny, 33, of her midwives. “They were respectful and very knowledgeable. They followed the birth plan and they were very supportive in helping me have that natural birth and making those choices.”
Enny’s second baby was among the first delivered by Slone’s midwifery practice after joining with University of Maryland St. Joseph Medical Center in Towson.
A private practice, Kathleen Slone CNM & Associates was previously tied to Mercy Medical Center in downtown Baltimore, where Enny delivered her first child and where the midwives delivered up to 270 babies annually.
Despite a growing trend toward midwife use, it is not well understood by the general public, said Slone, 68, who holds a degree in midwifery from Yale University.
“It’s almost like we’re a very well-kept secret,” she said.
On the rise
A 2012 analysis of U.S. Centers for Disease Control and Prevention (CDC) data revealed that rates of certified nurse midwives (CNM)-attended births rose in the U.S. between 1989 and 2009 from 3.3 percent to 7.6 percent.
Dr. Julie Rossiter, chief of obstetrics and gynecology for UM-SJMC, thinks that’s a good thing.
“The (national) C-section rate is extremely high,” she said. “There is a significant segment of the patient population that wants a low-touch experience.”
Physicians “tend to be more medical” than midwives, Rossiter said.
Midwives typically only work with low-risk pregnancies. Many patients look to midwives for support in having unmedicated births. Midwives do not perform caesarian deliveries, and studies show midwifery helps to reduce the rates of unnecessary caesarian births.
According to the CDC, the national cesarean delivery rate was 32.8 percent in 2012, up 60 percent from its 1996 rate of 20.7 percent. Rates vary by hospital.
St. Joseph’s OB-GYN care also includes another midwifery practice, Women’s Heath Associates. Midwives attend about one-third of the hospital’s births, Rossiter said.
More options
The addition of Slone’s practice expands women’s options at the hospital, including the use of a hydrotherapy tub to manage pain during labor. It’s something Slone has used for a long time, but is new to St. Joseph.
Slone also has a reputation for developing a labor maneuver known to help open the birthing mother’s pelvis.
“She’s teaching us,” Rossiter said, calling Slone and her practice “a tremendous addition.”
Slone began practicing at Mercy in 1985, and said her practice left because of the rise of OB-GYN medical malpractice insurance in Baltimore City. She also worked in Johns Hopkins University’s student health services until this year.
Rossiter said SM-SJMC’s use of both doctors and midwives “beautifully complement” each other. Doctors are immediately available for medical advice or in the case of labor complications.
“It’s an integrated model,” she said. “There’s collaboration between the doctor and midwife about the care.”
That’s important to Slone, who started her midwifery career at Johns Hopkins University Hospital and has always worked with hospitals. Some midwives work in stand-alone birth centers or assist in home births.
“My philosophy has always been it doesn’t have to be an either/or proposition – in the hospital the doctor way, or at home – that there was a middle ground,” she said. “There was no reason that a hospital couldn’t bend and be more flexible for the normal healthy woman – to let her have choices in how her care is going to be.”
Also see:
Voice of Assisi ‘opens door from heaven’ for city schoolchildren
Spiritual milestone: Parishioners make one million rosaries for the military
PrevNext