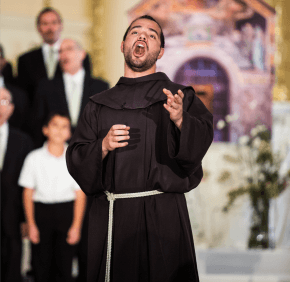 By Jessica Marsala
Special to the Catholic Review
One would think that a Franciscan Friar committed to a vow of poverty would not need a lesson in simplicity.
But that was exactly what Friar Alessandro Brustenghi, an international recording artist, said he received when he came to Baltimore to sing with “Francis in the Schools,” a California-based, nonsectarian program devoted to sharing the message and ideals of St. Francis of Assisi with city children.
During the Oct. 17 concert at the Basilica of the National Shrine of the Assumption of the Blessed Virgin Mary, Friar Alessandro serenaded more than 800 children from mostly inner city Baltimore schools with seven songs, while volunteers from Francis in the Schools accompanied him and acted out small scenes from St. Francis’ life.
Friar Alessandro, who lives in Assisi, a short drive north of Rome, said that St. Francis’ message has no ideal audience because it is universal, but that it appeals particularly to children, as “they have something more that is called simplicity.”
“Life is very simple,” he added. “Sometimes we try to find reasons and meanings but this doesn’t help us. What really helps us is to find the simplicity.”
To view a slideshow from the event, navigate the arrows below.
See a photo you would like to purchase? Click here.
After Friar Alessandro finished his last song, “Make Me A Channel of Your Peace,” based on the prayer of St. Francis, the children, their teachers and chaperones gave him a standing ovation.
“They just reacted with the right spirit,” said Cathy Marshall, principal of Archbishop Borders School in Baltimore. “(They) knew the appropriate time to clap because they felt it within them. … They see things in action and I think without even knowing it they absorb a lot of the Franciscan spirituality.”
After the concert, students took in an Umbrian Renaissance Fair, a key component of Francis in the Schools, staged at nearby Peabody Institute. At the fair, students ate, played games, danced, made crafts and learned more about St. Francis.
Marshall noted that Borders School chose peace for the year’s school theme, and had prepared students for the event by learning about St. Francis and the saints.
Friar Alessandro, who had never traveled by air before 2012, was making his first trip to Baltimore. His tour included two concerts in Washington, D.C., last week.
The friar, who said that Charlie Chaplin’s “Smile” is one of his favorite songs to sing, recorded his first CD in 2011, “Voice from Assisi.” He is currently working on his third CD.
“Music is like a key that is able to open a door from heaven, and from heaven we are full of the Holy Spirit and this happens by itself: I just sing. Music is the sound of the voice of God,” he said. “I don’t use music to evangelize. Music use(s) me to evangelize.”
Also see:
Spiritual milestone: Parishioners make more than 100 rosaries for members of the military
New Cumberland memorial honors babies who have died
PrevNext