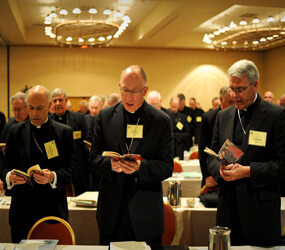 SAN ANTONIO – In one of a series of status reports on ongoing projects of the U.S. Conference of Catholic Bishops June 18, bishops attending their spring meeting in San Antonio were told the rapid pace of legal changes on the status of marriage in the United States has been keeping that concern a top priority.

Archbishop Joseph E. Kurtz, of Louisville, Ky., chairman of the Ad Hoc Committee on Defense of Marriage said the challenge in meeting the bishops’ priority focus on marriage has been the quick rate at which states and courts have been taking up legislation that legalizes same-sex marriage or prohibits it.

Six states now recognize marriage between same-sex couples, Archbishop Kurtz said, and others are considering the same type of laws or a range of others “allowing everything but marriage,” that would give new legal rights to civil unions.

The same day Archbishop Kurtz gave his report, President Barack Obama announced he was instructing federal agencies to extend family benefits to same-sex partners of federal employees where it can be done by administrative order, such as in the State Department.

He also affirmed his desire to overturn the Defense of Marriage Act, saying it’s discriminatory and interferes with states’ rights. The 1996 law says no state has to recognize a union recognized as a marriage in another state, and affirmed that under federal law the definition of marriage is a union of one man and one woman.

In his report, Archbishop Kurtz said affirming church teaching about marriage is a challenge for the committee in meeting the USCCB’s priority of strengthening marriage, one of five priorities being by tackled by task forces the bishops approved last November.

The church’s teaching about the “truth, beauty and goodness” of marriage between one man and one woman is “a received truth, not something we arbitrarily create,” Archbishop Kurtz said.

He explained that the key points the ad hoc committee is focusing on to support marriage are:

– That marriage is inherently related to sexual differences and the complementarity of men and women.

– That marriage is for the good of children, who are themselves “a great good of marriage.”

– That marriage is a unique bond reserved to men and women by nature.

– That same-sex marriage has negative effects on religious rights.

Archbishop Kurtz said the committee hopes to have a new video for the campaign ready to present to the bishops at their November meeting.

The bishops also heard brief reports from their conference vice president, Bishop Gerald F. Kicanas of Tucson, Ariz., about their other four priorities: faith formation and sacramental practice; the life and dignity of the human person; cultural diversity in the church; and promoting vocations to the priesthood and religious life.

Bishop Kicanas also warned against “analysis paralysis,” or the problem of “we keep talking about things but never bring anything to achievement.”

He noted that as various committees work on those priorities, they must remain conscious that “we can’t achieve everything,” though as Archbishop Kurtz’s report demonstrated, some steps are being taken on each subject.