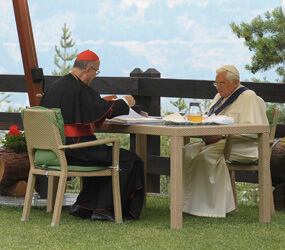 LES COMBES, Italy – With his right hand immobilized in a cast, Pope Benedict XVI is using a voice recorder to put down his thoughts and ideas, said the Vatican spokesman.

Five days after he underwent minor surgery to repair a broken wrist sustained in a fall at his vacation home in northern Italy, the pope was still doing well and was “in a good mood,” said Jesuit Father Federico Lombardi.

The right-handed pope “is still learning how to live with a wrist in a cast,” the spokesman said in a written statement July 22.

Pope Benedict normally has used his vacation period to work on his writing projects and, before the accident, it had been expected he would spend some of his free time to continue work on the second volume of his book about Jesus.

The pope “has equipped himself with a recorder so as to be able to dictate his reflections since he is unable to use a pen easily,” Father Lombardi said in the statement.

The pope had received a portable laptop computer as a gift July 19, but Father Lombardi told reporters July 20 that the 82-year-old pope “is not used to writing with a PC; he isn’t very technological,” adding that “especially in creative work he prefers to use a pen.”

Father Lombardi said Pope Benedict has been speaking regularly by phone with his older brother, Monsignor Georg Ratzinger, who lives in Regensburg, Germany.

The 85-year-old monsignor will spend four weeks with the pope at the papal summer villa at Castel Gandolfo, south of Rome, Father Lombardi said.

After the pope’s stay in the Alps, he will go directly to the papal villa July 29. Popes generally stay at Castel Gandolfo until late September.

Before leaving the Alps, the pope will preside at an evening prayer service July 24 in the cathedral of Aosta, which is near the village of Les Combes, and deliver a homily.

Some 400 people – including priests, men and women religious, and two laypeople from every parish in the diocese, as well as representatives from diocesan offices and church organizations – were to attend the service, Father Lombardi said in the written statement.