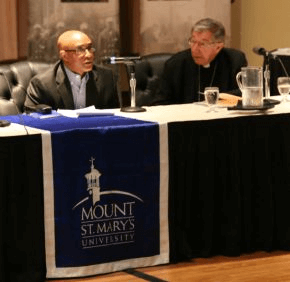 By Linda Norris-Waldt
Special to the Catholic Review
EMMITSBURG – On a day when Baltimore’s legal system revisited the aftermath of the death of Freddie Gray Jr. and riots that followed last April, Mount St. Mary’s University began a year-long campus conversation with a timely panel discussion about how to pursue tenets of Catholic social justice.
“Justice in America Today? Challenges and Opportunities for Action” at the Knott Auditorium Sept. 2 included former Baltimore Police Commissioner Anthony Batts; Marc Mauer, a national expert on minority incarceration as executive director of the Sentencing Project; and Baltimore Auxiliary Bishop Denis J. Madden.
“The issues that led to the riots happened in Baltimore 10 years before and we didn’t even pay attention,” said Batts, who had been commissioner since 2012 until he was fired in July.
Citing his experience growing up in Los Angeles and as a police officer and leader in Long Beach and Oakland, Calif., he said he had employed strategies to drive down crime in Baltimore.
“We were hitting home runs except for one: public trust,” said Batts, whose comments about officers’ “taking a knee” since the riots went viral.
The event, attended by 500 people from the university community, took place on a day when all eyes were again on Baltimore, where a district court judge ruled in pre-trial hearings that the six Baltimore City police officers charged in the death of Gray must stand trial, and will do so separately.
Some feared a dismissal of charges might touch off riots similar to those April 27 that resulted in massive arrests, property damage and injuries to police after Gray’s funeral.
The Baltimore conflict and other national incidents involving clashes between police and minority residents spurred the Sept. 2 event here, and will frame a series of town halls and other events across campus throughout the coming year, said Paula Whetsel-Ribeau, associate provost for diversity and assessment.
Students on campus had grown more and more vocal, holding prayer vigils and campus meetings as incidents police-citizen conflicts occurred in Ferguson, Mo., and New York City.
After Gray’s death, a group of students left campus to “stand” in Baltimore, Whetsel-Ribeau said. They connected with students from other Maryland colleges to provide a calm presence in Baltimore and to show solidarity with the community.
Simon Newman, who began his tenure as Mount president last spring, asked faculty to develop a strategy to fulfill the university’s Catholic social justice mission in response to the unrest. He sent an appeal to the campus community about their responsibility to seek social justice.
“It is our responsibility to look at the deaths of those in police custody and see how racism still burdens our community and country,” Newman told students. “It is important our society confronts issues undermining the human dignity of every citizen and serve as a collective force for positive change.”
Whetson-Ribeau said the Sept. 2 speakers were asked to identify specific action steps for students. All three urged students to come to Baltimore and join other college groups who have organized to work to improve lives there.
Batts encouraged the students to use their futures to address issues of socioeconomic hardship that had created two Baltimores: one affluent and largely Caucasian, the other African-American and Latino and “a place where people say, ‘I am trapped, I can’t get out.’”
Bishop Madden said his proudest moment was working with St. Peter Claver Parish on Fremont Avenue in Baltimore, where 100 parishioners emerged with brooms and shovels within hours of the riots to clean up property damage.
“The TV networks were there, and they didn’t want them to see that their church and neighborhood were covered with debris and think ‘we are second class citizens,’” he said. Bishop Madden said the archdiocese has always worked in city parishes to address hunger, health care and other issues related to poverty.
Tyler Kline, a second-year theology student at Mount St. Mary’s Seminary, and Brendan Fitzgerald, a first-year theology student, both of Baltimore, noted that Archbishop William E. Lori directed seminarians to make their summer pilgrimage in Baltimore and visit St. Peter Claver, which they did July 31.
“It was good to hear Bishop Denis (Madden) discussing the church’s role, and particularly the role in bringing hope,” Kline said. “Catholic social teaching is a constituent part of our belief, not an add-on.”
One student referenced on-campus tension last spring
“I didn’t feel we got to the answer to the question of why this is happening and what to do about it,” said sophomore Jazzmine Alston, a West Baltimore resident who was troubled that on-campus vigils during the unrest were ridiculed on social media by other students. “Mr. Newman spoke up at the right time about our need to do something within our community.”
After the event, Newman said he looks forward to exploring more answers.
“People grow up with a bias, and culture baggage, and it is subconscious,” he said. “It’s important to look at events from multiple perspectives, and listening and understanding. If this is starting the process, it’s a good thing.”