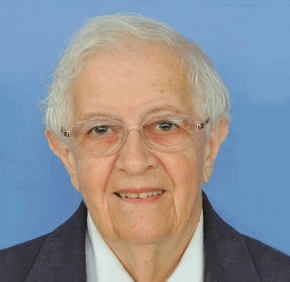 Born in Rochester, N.Y., Sister Mary Trinita first encountered the School Sisters of Notre Dame in the second grade, when she transferred to Holy Redeemer School in Rochester. Interested in religious life since childhood, she joined a club to explore that interest as a junior in high school. After her graduation in 1947, she went to work at a box factory for several months before traveling to Baltimore to join the School Sisters of Notre Dame.

During her second year as a candidate for the order, she taught first grade at Sacred Heart of Jesus School in Highlandtown.

Sister Mary Trinita professed her first vows in 1950. From then until 1964, she taught first and second grade at the former St. Leo the Great School in Little Italy, while earning a bachelor’s degree in education from what is now Notre Dame of Maryland University.

From 1964 to 1971, Sister Mary Trinita taught every grade from third through seventh at St. Mark School in Catonsville.

After a year in residence at the Holy Redeemer Convent in Rochester, during which she earned a master’s degree in education, she returned to Baltimore to teach and serve as principal of the former St. Jerome School in 1972.

After one more year in Rochester, Sister Mary Trinita returned to Baltimore to serve as principal of Holy Spirit School from 1973 to 2001. It was located on the campus of St. Bernard, also now closed.

From 2001 to 2013, she served as a receptionist at Brighton Gardens in Baltimore. Beginning in 2013, she volunteered at the Villa Assumpta gift shop and ministered to the sisters in Maria Health Care Center – answering their mail, tidying their rooms and spending time with them.

Sister Mary Trinita is remembered as a great Catholic educator. In the early 1990s, she was a major part of the effort to establish more pre-K classes in the Archdiocese of Baltimore. At Holy Spirit School, she was instrumental in growing the friendship between her students and those of St. Elizabeth School, a Baltimore school for students with special needs.