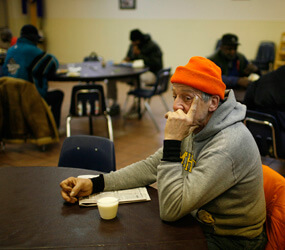 WASHINGTON – Now that Pope Benedict XVI’s long-awaited social encyclical, “Caritas in Veritate” (“Charity in Truth”), has been released, a key question arises: Will the pope’s call to reform economic and social systems so they encompass broader moral values while focusing on human development be taken seriously by the world’s decision-makers?

Certainly, they concluded, there is no better time than the present – as the world struggles to overcome its deepest economic recession in nearly 80 years – to give ethical concerns greater consideration in policy decisions.

“I think almost everybody understands that what we have here is not only an economic failure but a moral failure,” Carr added.

Carr’s analysis is one shared across a broad cross section of American political, academic and justice networks that have conducted countless studies into how the crisis developed. Segments of the business community, particularly the financial sector, might agree, but their observations have been guarded.

Overall, however, not many professionals will admit that their actions led to the massive financial failures in what author Chuck Collins described to Catholic News Service as “a bubble economy based on casino capitalism.”

“We’ve moved to an extreme,” explained Collins, a Catholic, who co-wrote “The Moral Measure of the Economy,” published in 2007 by Orbis Books. “You have a value of regard for life over a focus on consumption and material happiness,” he said. “We’ve reached this kind of zenith of a value imbalance.”

Collins said he expects that Pope Benedict’s message, based on common values that people around the world hold, will lead to new regulations on business practices to prevent recent abuses in the financial markets from occurring again.

“Most people are hungry to live in a society that places values above individual greed and want to live in communities where human life and opportunity flourish,” he said.

Catholic business owner Umberto P. Fedeli, president and CEO of the Fedeli Group, one of Ohio’s largest insurance brokerage firms, was more outspoken in his comments. He said the business world can learn much from the recession that started in December 2007.

“If we treated people like we were our brother’s keeper and we were more men and women for others, then we would have probably avoided a big part of this economic crisis, which has been an unfortunate moral crisis,” Fedeli told CNS from his office in suburban Cleveland.

“If you do this, you wouldn’t have to compromise.”

Steve Hayes, senior partner and founder of the Human Capital Group Inc., a Nashville, Tenn., executive placement and leadership consulting firm, went a step further, saying that business leaders would do well to adopt Christ’s example of being a servant leader.

“As a business leader, it’s such a paradox because we’re wired to put ourselves first and others second,” he explained. “But Christ modeled that that’s not the successful path.

“Until we as individuals and as leaders of families and employees and leaders of businesses really get what Christ is teaching us, I think we’re always going to have the issues the pope’s talking about,” Hayes said.

Hayes’ 9-year-old company has worked to uphold the strictest ethical standards. His firm has expanded to four other cities in Florida, Georgia and Ohio and had revenues of $2.3 million in 2008, placing it among the top 25 percent of executive placement firms in the country. He attributed his success to adhering to ethical business principles and to following the “paradox of the cross.”

“That’s what the pope is trying to challenge us to be, to not be me-centered, but to be other-centered,” he said.

While Hayes and Fedeli have found success running their companies based on strong ethical practices, Carr acknowledged that the moral framework for a just society offered by Pope Benedict in “Charity in Truth” will not be easy to implement.

But that does not mean people should ever stop trying. Just ask Sister Simone Campbell, executive director of Network, a Catholic social justice lobby, which for 38 years has promoted legislation and policies in Congress to ensure a more equitable world.

“(The encyclical) is not a call to religious conversion,” Sister Simone, a Sister of Social Service, told CNS. “It’s a call to economic reality. … It’s a very pragmatic, eyes-wide-open approach that gives it greater resonance in the public forum.”