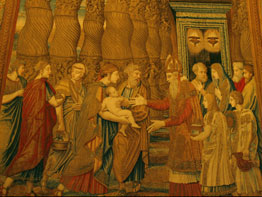 VATICAN CITY – Perhaps even more than Michelangelo’s frescoes or the statue of Laocoon, the discouragingly long entrance line – often stretching half a mile – has become the modern emblem of the Vatican Museums.

In peak seasons, visitors can wait more than an hour to get inside the museum complex. And once inside, it’s shoulder to shoulder in some of the more popular rooms and hallways.

The congestion is the price of success at the Vatican Museums, where attendance has more than tripled over the last 30 years. In 1976, about 1.3 million people came to the museums; last year, the number reached nearly 4.3 million.

Economically, this is all good news. Last year, the Vatican Museums took in about $65 million and spent about half that amount, providing Vatican City with its most significant source of income.

But for visitors, the experience can be more claustrophobic than cultural. On a recent morning in the Sistine Chapel, where everyone seems to end up, it was more packed than a Roman bus at rush hour.

In early December, the Vatican Museums got a new director, Antonio Paolucci, and already he’s indicated that he considers the lines and the crowds a priority problem.

Under Paolucci, the Uffizi Gallery in Florence long ago instituted a reservation system for all visitors, an idea that’s expected to be introduced at the Vatican in 2008. The reservations are made for specific times throughout the day, virtually eliminating walk-ins and reducing the wait.

Earlier this year the Vatican launched a reservation system, but it was only offered to groups. At the same time, it reduced museum entrance hours for individuals, making a bad situation worse for most tourists.

The Vatican and the city of Rome are moving forward on plans for a subterranean entry area to the Vatican Museums that would feature shops and information displays. That would at least bring the lines out of the summer sun and winter rains.

Some Vatican officials are also looking at the possibility of connecting the Vatican’s own train line and station, rarely used today, to the Rome subway system as a way to shuttle visitors to a separate museum entrance.

One of the problems with the Vatican Museums is that it’s only open five hours a day for much of the year. Closing down at lunchtime is an Italian tradition that has been scrapped by most museums, and the Vatican, too, is finally considering longer hours throughout the year.

Nighttime openings, already offered in many Italian museums, would further decompress the visitor flow and attract people who are unable to visit during the day.

Paolucci, however, has dared to hint that record attendance is not necessarily the best thing for a museum. In an interview Dec. 5 with the Italian newspaper Avvenire, he recalled that 100 years ago in Florence the number of museum visitors was only 160,000 for the entire year.

“Selfishly speaking, I’d prefer to keep the situation of the early 1900s,” he said.

Paolucci also took issue with the modern trend toward “culture as spectacle” and the promotion of celebrity works of art over the study of collections. Even the Sistine Chapel suffers from this kind of fame, he said.

“This is one of the aspects of the barbaric obscurantism that characterizes our age: the fatal attraction for the well-known,” he said.

Webster’s defines obscurantism as “opposition to the spread of knowledge.” Paolucci’s point was that by giving almost exclusive attention to a museum’s most famous works much is overlooked.

The Vatican Museums once estimated that it exhibits about 30,000 objects of art and holds another 120,000 in storage. In recent years, officials have tried to highlight some of these lesser-known objects, including works of modern art.

The Vatican has also opened up new sections of the museum. The latest wing, inaugurated in September, was dedicated to Vatican postage stamps.

But on a recent morning, the stamp museum was virtually empty. Not far away, thousands of tourists marched down the hallway toward Michelangelo’s frescoes. They were voting with their feet, and the Sistine Chapel was still king.