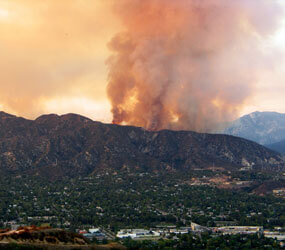 LOS ANGELES – For Father Richard Krekelberg, pastor of St. Rita Church in Sierra Madre, the Station fire that destroyed more than 50 homes, threatened 12,000 more and led to the death of two firefighters was a painful reminder.

A wild conflagration in April 2008 raced across ridges and down canyons to the very last foothill before the cozy town and St. Rita.

“Well, this fire has been a real close parallel for me,” he told The Tidings, newspaper of the Los Angeles Archdiocese. “Back then we had to cancel confirmation, although this time we didn’t have to close anything.

“You want to be responsible, and yet you want to be a place where your parishioners and others in the community might be able to come for safe haven,” he added.

Father Krekelberg said the “regulars” were still showing up for the 8 a.m. daily Mass he celebrates, but a number of elderly parishioners complained about how it was hard to breathe.

“And the people here in Sierra Madre, they’re very much of the attitude, ‘Oh, we’ve been through this before,’“ he pointed out. “Since they don’t see fire on our hill, they say, ‘This isn’t about us this time, thank God.’ But you can say that their pastor still worries a bit.”

By early Sept. 2, the Station fire – the largest of a half-dozen major fires in Southern California – had burned more than 140,00 acres in the Angeles National Forest. But helped by cooler weather, containment of the fire was 22 percent, with a fire line that stretched more than 30 miles and was manned by nearly 7,000 firefighters from La Crescenta to Acton. The fire had destroyed at least 53 homes and structures.

Most tragically, the unpredictable, fuel-driven fire claimed the lives of two Los Angeles County firefighters: Capt. Tedmund “Ted” Hall, 47, and Firefighter Specialist Arnaldo “Arnie” Quinones, 34. They were killed Aug. 30 while trying to find an escape route for 55 inmates at a corrections camp high in the Angeles National Forest.

The devastating fire also caused parishioner evacuations at several local Catholic churches, including the Benedictine monastery at Valyermo, and resulted in the closure of some Catholic schools just beginning the new school year. In some cases, members of unaffected parishes offered to host evacuees.

Our Lady of Lourdes School in Tujunga wasn’t expected to open until at least Sept. 3 because of the poor air quality exacerbated by falling ash. Attendance at weekend Masses at the parish church was light, according to Father Freddie Chua, pastor.

“We’re just watching and waiting,” said Father Chua, who added that he received a courtesy call from a Catholic Charities representative as well as many calls from concerned parishioners inquiring about the parish. “There’s been a good response from the people,” said the priest.

The main problem for so many people was poor air quality – even if their church or school remained open. For example, at St. Lucy’s Priory High School for girls in Glendora, Benedictine Sister Monica Collins, principal, reported: “We had to stop any outdoor activity in terms of PE.”

“Sports have been canceled. … The smoky air has been with us for a week,” she said. “You can not only smell it, but it affects your eyes and ears, too. And the valley is still full of it today.”

Smoke from the Station fire also was a problem for parishioners of Sacred Heart Church in Altadena.

“They’re worried, and they’re staying indoors,” said Emma Mendez, office manager. “A lot of our parishioners are elderly, so the weekend Masses weren’t as full, which is understandable.”

Mater Dolorosa Retreat Center in Sierra Madre had not yet had to cancel any retreats. But about 60 people on retreat there were staying inside.

“In terms of safety and security, we’re just sitting on pins and needles because we don’t know if at some point the fire is going to move in our direction and we’ll have to evacuate,” said Elizabeth Velarde, administrator.

Ann Gillick, principal of the all-girls’ Alverno High School in Sierra Madre, pointed out there wasn’t much left to burn there after the spring 2008 fire. “We paid our dues,” she quipped.

But Gillick reported that the air was “so thick” and thought it better for students to be in air-conditioned classrooms than have a day off and be outside.

Many parishioners of St. Bede the Venerable Parish in the hillside community of La Canada Flintridge had to be evacuated, according to Monsignor James Gehl. The pastor said it was one of the “struggles” for his parish families who were going to be away from their homes for several days.

Monsignor Gehl said the good news was no homes in the community had been destroyed and he credited that to the lack of any Santa Ana winds. “If there was wind, we would have been in major peril,” he stressed. “It could have been tragic, absolutely tragic.”

The veteran pastor said he was proud of his parishioners for offering their homes to people who had been displaced, although most evacuees wound up staying with relatives.

“The firefighters have also been doing an incredible job,” Monsignor Gehl reported. “We’re going to post a banner on the front of the church: ‘Thank you, firefighters. God bless you.’“