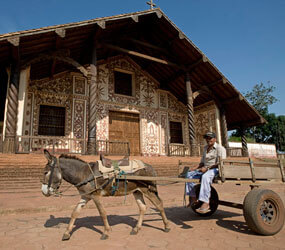 COCHABAMBA, Bolivia – Half a millennium has passed since missionaries arrived in what is now Latin America, and the region – which was then inhabited entirely by native peoples, some with complex civilizations – is now considered the most Catholic in the world.

So why does it need missionaries?

Meeting in Aparecida, Brazil, in 2007, the region’s bishops called for the Latin American church to be in a “permanent state of mission.”

The bishops realized that “Latin America is a continent of people who are baptized, but who are not really disciples, much less missionaries,” Jesuit Father Victor Codina, a theologian who lives in Bolivia, told Catholic News Service. “Many people have little sense of belonging to the church.”

Experts say that building a sense of belonging among Catholics and encouraging them to share their faith experience – which is the essence of missionary action – are challenges for the church in the region.

“You have to begin by encouraging people to have a spiritual or religious experience, which in technical terms is called mystagogy – initiation into the spiritual life,” Father Codina said. “Without that, there is no faith, no mission, no Christian life.”

At a symposium held in Cochabamba – a modern city with an indigenous Quechua face – in late August to mark the centennial of the U.S.-based Maryknoll Fathers and Brothers, participants described challenges and new arenas for mission in Latin America.

Perhaps most important, they said, was viewing the church’s mission not as taking the Catholic faith to other people, but as a process of dialogue and developing relationships with others, especially those on the margins.

In Latin America, they said, that means listening to and learning from the people who lived in the region when the first Catholic missionaries arrived.

“There must be recognition of the values of the various indigenous people, who are the ones who suffered most from the impact of colonization,” said Franciscan Father Roberto Tomicha, who hails from a Chiquitano indigenous community in Bolivia’s eastern lowlands.

Today’s challenge is to establish a relationship of equals between the church and indigenous peoples, because the first European missionaries “had a paternalistic mentality,” Father Tomicha said. “We were considered to be like children who never grew up.”

According to Calixto Quispe, a permanent deacon in the El Alto Diocese outside La Paz who learned traditional Aymara rituals from his grandfather, the church needs “dialogue between cultures; dialogue between generations, between parents and the children of today; interreligious dialogue; and dialogue with problems in society.”

The role of the missionary, he said, is “to accompany that dialogue, valuing what should be valued and prophetically denouncing what must be denounced.”

“One of the challenges is dialogue with indigenous spirituality and the indigenous world view. This is a second chance, 500 years after the conquest, of actually beginning a dialogue. It’s an opportunity to make up for past errors, and it’s very important if we’re talking about mission,” he said.

“Mission is going beyond ourselves to others, to share our experience of God and to discover their experience,” Father Finch said. If Catholics in Latin America do not do that with the largest group of people in the region who have a different world view, “what kind of mission are we talking about?”

From its beginnings as a language school for foreign missionaries, the Maryknoll center in Cochabamba has expanded its programs to provide comprehensive mission education for students from throughout Latin America. Some 400 people have completed the center’s programs, Father Finch said.

Recent additions to the curriculum include a diploma program on citizenship and intercultural ethics and another on Andean cosmovision and the Quechua language, aimed at schoolteachers.

“They don’t sound like missionary topics, but they are,” Father Finch said. “If you can help people feel more comfortable in their identity, then they’re more free to share it, and I think that’s a missionary contribution.”

Besides recognizing the history and cultural identity of the region’s indigenous people, responding to the Latin American bishops’ exhortation at Aparecida means addressing the rapid social changes that have occurred in the past few decades, said Dominican Sister Gabriela Zengarini, an Argentine theologian.

The shift from a predominantly rural, agrarian society to a primarily urban one has posed challenges to which the church has yet to respond effectively, she said. Those changes are amplified by the impact of economic globalization, with greater access to technology and communication, increased migration, consumerism and a faster pace of life.

But while most Latin American countries have seen significant economic growth in the past decade, largely spurred by high international prices for minerals and petroleum, millions of Latin Americans – especially indigenous people, women and children – still live in poverty, and income distribution is among the most unequal in the world.

The goal of mission is “for people to have life and have it in abundance,” Sister Gabriela said. “In Latin America, we still have a long way to go before people have life in abundance.”

The bishops’ exhortation at Aparecida calls all baptized people to become missionaries in their neighborhoods, communities and workplaces.

“The beautiful thing about Aparecida – which still needs to be put into practice – is that every believer is a disciple and a missionary,” Sister Gabriela said. Like the Samaritan woman who met Jesus at the well, they are called to encounter Christ and spread the word.

But in contrast with earlier views of mission, she said, “good news is not imposed – good news is shared.”