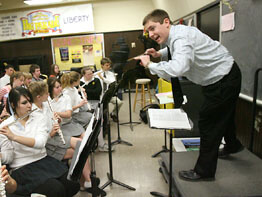 Most people know the Knights of Columbus as the men who stand outside church in October handing out tootsie rolls or the men who march in local Independence Day parades dressed in capes and feather hats, but the Knights are so much more. Along with doing charitable works, these men are husbands, fathers and employees, ranging from servicemen to priests.

“We have members from all walks of life from truck drivers to bankers and beyond,” said Brian O’Connor, Maryland state Knights of Columbus public relations chair, who mentioned that even President George W. Bush’s tailor is a knight in the Archdiocese of Washington.

Father Michael DeAscanis, associate pastor of St. Ursula, Parkville, became a Knight at the age of 30 while attending seminary.

“I wanted to be able to assist the knights in forming Catholic men and strengthening families,” said Father DeAscanis, 36, who has been giving a series of talks on what it means to be a knight today.

“One of the reasons Father McGivney started the organization was to bring young Catholic men together to encourage each other to grow in virtue,” said Father DeAscanis who was ordained a priest in 2004.

Father McGivney founded the Knights of Columbus in 1882. His goal was to help men become good fathers, chased men, do good work, be responsible and pray together and those values and standards are still upheld today, said Father DeAscanis.

At the young age of 18, Daniel Briggs, the music director at The John Carroll School, Bel Air, joined the Knight of Columbus, Father Maurice J. Wolfe council #11372, in order to help and support his parish of St. Francis de Sales, Abingdon.

“I decided to join the knight because my grandfather had been a knight most of his life and he was a role model in my life,” said the 23 year-old community service chair for his council.

Mr. Briggs said through the Knight of Columbus he has been able to interact with many people in the community and these experiences help him relate to his students and be a better teacher.

“The knights have been a real inspiration in a world that can be very challenging,” said Mr. Briggs. “The knights are great role models for youth and society in general. They stay true to the Catholic values.”

The knights sponsor fund raisers for crisis pregnancy shelters, those that are mentally handicapped, families affected by September 11 and Hurricane Katrina and youth groups. They support seminarians and the Catholic Church as a whole, especially the Pope, said Father DeAscanis.

Dr. Ruben Ballesteros, 67, has been a plastic surgeon since 1964 and is now retired but he will continue to be a chapter member of the Santo Nino council at Church of the Nativity, Timonium, for as long as his health will allow, he said.

“I feel an organization that is involved in religious along with civic works is worth joining,” said Dr. Ballesteros, who has been a member since 1986 and is also a member of the Catholic Medical Association, Baltimore Guild, for about four years.

The CMA is an organization of mostly physicians who help to make people aware of their obligations to the church and their practice, said the plastic surgeon.

Dr. Ballesteros said most of the activities the CMA and the knights do are centered on the teachings of the church and makes a person more aware of their behavior both professionally and as a member of society.

“It makes me aware of my obligations to my patients,” said the CMA recording secretary.
Joining these associations has helped strengthen his profession and personal life, said Dr. Ballesteros.