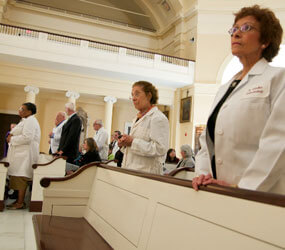 They sat in the pews of the Basilica of the National Shrine of the Assumption of the Blessed Virgin Mary in Baltimore, proud in their white coats, as Archbishop Edwin F. O’Brien thanked them all, for using their talents and for being instruments of God.

The Catholic Medical Association’s (CMA) Baltimore Guild held its annual White Mass Oct. 17, a celebration for physicians and those in the medical and healthcare profession.

Held in honor of St. Luke, patron of physicians, the liturgy was attended by a number of physicians, nurses, medical students, and those involved in the medical field. All received a special blessing from Archbishop O’Brien toward the end of the Mass.

“This celebration is a chance for the church to bless us and publicly recognize what we do in light of the ethical challenges we face as professionals,” said Dr. Marie-Alberte Boursiquot, president of the CMA’s Baltimore Guild. “We’re blessed that we have Archbishop O’Brien in our corner. It encourages us, knowing our shepherd is supporting us and keeping us in his prayers.”

Immediately following the Mass, a luncheon reception was held at the Engineer’s Club where Monsignor Stuart Swetland, a moral theology instructor at Mount St. Mary’s Seminary in Emmitsburg, was the guest speaker.

During his homily, Archbishop O’Brien praised the physicians and health care professionals in attendance for the ability to keep those in need healthy in mind, body and soul through God’s healing power.

He also touched on the moral and ethical situations many health care professionals face on a daily basis.

“While in England last month,” Archbishop O’Brien said, “Pope Benedict posed a question to that nation’s government leaders – one that is placed before you every day of your professional lives. ‘By appeal to what authority can moral dilemmas be resolved?’

“If the moral principles underpinning the democratic process are themselves determined by nothing more than social consensus, then the fragility of the process becomes all too evident.”

Archbishop O’Brien stressed the importance of prayer in both their private and professional lives, and asked them to use the ethics rooted in their Catholic faith when faced with dilemmas, an ethic he described as “based on natural law enlightened by faith and insisting on respect for the God-given dignity of every human being from conception to natural death. An ethic that sees the medical practitioner in the role of Christ, the healer of body and soul, preparing the patient for life here and hereafter.”

Controversial issues in the field of medicine, such as embryonic stem cell research, are proof that not everyone in the field shares those same ethics, believes Archbishop O’Brien.

“It is unnecessary to kill an embryo when you can get healthy stem cells from adults and placentas and umbilical cords,” he said. “So far stem cells from embryos have proved no positive results. It’s immoral to create human life in order to destroy it. It’s unworthy of their profession.”

The archbishop said that the CMA’s Baltimore Guild was a boon for the church, and is an example that all morality is not lost within the field of medicine.

“A guild like this is encouraging – it offers encouragement and spiritual strength,” Archbishop O’Brien said. “We just thank them for being faithful to higher ethical principles. That’s something that’s very difficult to do when the tide is against them.”