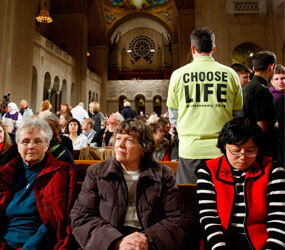 WASHINGTON – Pro-life activists flocking to the nation’s capital for the 37th March for Life Jan. 22 will be buoyed by recent polls that say they are among the majority of Americans who identify themselves as pro-life.

Organizers of the massive demonstration also have scheduled – for the first time in its history – a two-hour rally at Lafayette Park, across from the White House, the evening before the march, in an effort to demonstrate their commitment to the pro-life movement to President Barack Obama.

Billed as a mini-rally because the permit limits the gathering to 3,000 demonstrators, organizers say they planned the White House event to bring the “life principles to the president of the United States.”

Obama, nearing the end of his first year in office, has repeatedly said he supports keeping abortion legal in the U.S.

Tens of thousands from all over the U.S. travel each year to the nation’s capital for the Jan. 22 anniversary of the U.S. Supreme Court’s 1973 Roe v. Wade decision legalizing abortion.

The same day the Supreme Court ruled on the Roe case, it also handed down the companion decision Doe v. Bolton. Together, Roe and Doe defined abortion as a constitutional right and overturned most state laws banning the procedure.

As usual, the main event will begin with a noon rally Jan. 22 on the National Mall, followed by a march along Constitution Avenue that will end at the U.S. Supreme Court. From there, participants are urged to meet with members of Congress to lobby on abortion-related issues.

Pro-life activists have been encouraged in the last year that their message has been resonating with the American public and organizers of the March for Life hope to energize participants with poll numbers released in 2009.

A poll conducted last May as part of the annual Gallup Values and Beliefs survey found that a majority of Americans (51 percent) described themselves as “pro-life” with respect to the abortion issue, while only 42 percent said they were “pro-choice.”

The pro-life message will be augmented with a holdover exhibit of more than 300 Nativity sets from around the world at the Pope John Paul II Cultural Center near The Catholic University of America in Washington.

Cultural center officials say they’ve been keeping that exhibit up until the end of January for the last few years so that participants of the March for Life can stop by and pay homage to Mary, who they say is a symbol of hope for the pro-life movement.

While much of the March for Life will be similar to previous years, organizers said they added the White House mini-rally to give Obama something to think about when making future decisions concerning abortion.

Though the president affirmed his support for legal abortion shortly after his 2009 inauguration, he spoke on the subject during his May commencement address at the University of Notre Dame in Indiana, and vowed to seek common ground on the divisive issue.

To grab Obama’s attention, organizers of the White House rally are urging participants to bring flashlights instead of candles, and said the two-hour event will include prayer and song.

Although the March for Life is not linked to a particular faith group or ethnic community, a variety of organizations are holding multiple events in the nation’s capital and throughout the U.S. in the days surrounding the march.

The National Prayer Vigil for Life, sponsored by the U.S. Conference of Catholic Bishops and the Basilica of the National Shrine of the Immaculate Conception in Washington, will begin with a 6:30 p.m. EST Mass Jan. 21 and conclude with a 7:30 a.m. EST liturgy Jan. 22. Both will be broadcast live on the Eternal Word Television Network.

Cardinal Daniel N. DiNardo of Galveston-Houston will celebrate the evening Mass and Archbishop Timothy P. Broglio of the U.S. Archdiocese for the Military Services will be the principal celebrant for the morning Mass.

Also Jan. 21, the Cardinal O’Connor Conference on Life will be held at Jesuit-run Georgetown University in Washington for college and high school students. That day the Sisters of Life will host an afternoon of prayerful remembrance and intercession at the Crypt Church of the basilica to allow men and women whose lives have been affected by abortion to pray and seek God’s healing and forgiveness.

On the morning of the march, the Washington Archdiocese expects more than 20,000 Catholic teens and young adults from all over the U.S. to attend its youth rally at the Verizon Center, Washington’s largest sports arena.

The American Life League will hold a Jan. 20-23 conference billed as its 10th annual training and activism week at a Washington hotel.

Though pilgrims from across the nation will be in Washington for the March for Life, other U.S. cities will be holding their own events marking the Roe anniversary. Some are newer than others.

This will be the first year that a right to life march and rally will be held in Tulsa, Okla. The Jan. 22 event is sponsored by several local organizations and a coalition of churches, including Catholic, Lutheran, Anglican, charismatic, evangelical and fundamentalist.