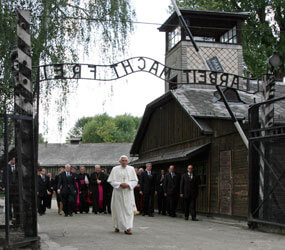 VATICAN CITY – When Pope Benedict XVI was elected on April 19, 2005, just three days after his 78th birthday, he said he would be more of a stay-at-home pope than his globetrotting predecessor Pope John Paul II.

But Pope Benedict has hit the road more often than expected. In his five years as pope he has traveled to every continent except Antarctica, visiting 17 countries on 13 foreign trips. Inside Italy, he’s visited 23 cities.

This year, he has five foreign trips planned: In mid-April he travels to Malta, followed by Portugal in May, Cyprus in June, England and Scotland in September and Spain in November.

The goals of these trips during his sixth year as pontiff will mirror the aims of all of Pope Benedict’s apostolic journeys: preaching the Gospel, underlining the contributions Christian values bring to culture and society, and bringing the face of the successor of St. Peter to the people.

Age has not appeared to slow down Pope Benedict, who scoots up stairs and had shown good stamina on his trips abroad.

The German pope’s voyages have sometimes taken him long distances. He traveled to Brazil in 2007, to the United States and Australia in 2008, and to Africa in 2009.

But most of his trips have been to Western Europe, in part because revitalizing Europe’s Christian roots has been a centerpiece of his papacy.

Pope Benedict has reduced the number of daily events on his papal journeys. Most trips feature just the essentials: one or more large outdoor Masses, separate meetings with clergy, young people and leaders from the world of politics and culture, as well as ecumenical and interreligious encounters.

An exception was his eight-day pilgrimage to the Holy Land in 2009, which included 40 separate events.

While the papal programs are planned months ahead of time, last-minute additions have been squeezed into a normally packed schedule. For example, on his trips to the United States and Australia, Pope Benedict quietly and privately met with victims of clergy sex abuse.

Pope Benedict has made a significant number of day trips to Italian cities across the peninsula, many to honor saints or holy places associated with them. He also visited the earthquake-struck areas in the Abruzzi to witness the damage firsthand and offer his spiritual support to survivors.

– His first U.S. trip as pope in 2008, featuring an address to the United Nations for the opening of its General Assembly and stops in New York and Washington. Among the highlights were a private meeting with victims of clergy sex abuse, Masses at baseball stadiums in both cities and a solemn visit to ground zero to pray for victims of the Sept. 11 attacks. During the visit, the pope addressed what he called the “attack of a new secularism” that threatens to undermine traditional moral values and the voice of religion in public affairs.

– His visit in 2006 to Poland to pay tribute to Pope John Paul and follow in his footsteps by visiting sites dear to his predecessor. The German pope also visited the Nazi death camp of Auschwitz, where he condemned the brutality and cynicism of the Nazi regime. He urged the world to remember the Holocaust as “the abyss of terror” and “unprecedented mass crimes.” He called for healing and reconciliation, including in other parts of that world that are today suffering from “the violence which hatred spawns.”

– His first visit to a synagogue was in Cologne, Germany, in 2005. At the place of worship of the oldest Jewish community in Germany, the pope marked the 60th anniversary of the liberation of Nazi death camps, as well as the 40th anniversary of “Nostra Aetate,” the Second Vatican Council document that opened a new season of dialogue between Jews and Christians.

– His trip to his native Germany in 2006, which brought him back to places where he grew up and taught as a professor. The homecoming atmosphere was overshadowed by his comments on Islam in an academic lecture at his former university in Regensburg.

– His first visit to a Muslim place of worship when he visited the Blue Mosque in Istanbul, Turkey, in 2006. The trip was crucial for building new bridges with Islam in an effort to repair the fallout from his Regensburg speech.

– His biblical pilgrimage to Jordan, Israel and the Palestinian territories, which was also an interfaith mission and a political balancing act. He visited a mosque in the Jordanian capital, prayed at the Yad Vashem Holocaust memorial in Jerusalem, visited the Western Wall and prayed before Christ’s empty tomb in Jerusalem. He told believers that they have a duty to make religion an effective force for good in a region suffering from war, mistrust and misunderstanding.

– His visit in 2009 to Cameroon and Angola was best remembered for the warmth of the reception – the last time a pope had visited Africa had been in 1998. But most news outlets focused on remarks he made to journalists traveling with him on the papal plane, saying the use of condoms would not solve the HIV/AIDS crisis ravaging the continent.