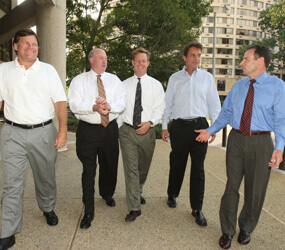 The mother wrung her hands, attempting to explain what the kindness of strangers has meant to her sons.

Attending a middle school in Baltimore City, her oldest was being mercilessly bullied, in hallways and on the bus. Desperate, the boy’s family wrote a letter to then-Maryland Governor Robert Ehrlich.

That letter made its way into a case file that was being maintained by a local foundation. It crystallized the boy’s dire straits and his family’s determination to improve his lot, and helped both he and his brother make their way into a Catholic grade school and then high school.

“My husband works hard and we’re not a poor family, but we live paycheck to paycheck,” said the mother, who asked not to be identified, citing lingering concern for the off-campus safety of her sons. “If my boys had remained in public school, I would have lost them.

“We’re active in our parish and we want the boys in Catholic schools. If it wasn’t for G.B. Charities, we wouldn’t be able to do this.”

In an era in which even two-income families in comfortable suburbs struggle to make Catholic education a reality, G.B. Charities Inc. will make that dream come true for more than 50 boys and girls from lesser circumstances in the Archdiocese of Baltimore during the 2009-10 school year by paying their tuition.

It stages a massive bull and oyster roast each February and a pair of golf tournaments, but the uniqueness of G.B. Charities lies in the fact that it has raised nearly $2 million worth of tuition with zero overhead since its formation in July 1991, and that the commitment of its brain trust hasn’t flagged one iota since then.

It began with a group of guys in their 20s, talking sports and life over a few beers and always circling back to a common theme: Where would we be without Catholic schools?

Whether it was the Jesuit influence at Loyola College in Maryland and Loyola Blakefield, or the Christian Brothers at Calvert Hall, or the Daughters of Charity at St. Dominic School in northeast Baltimore, a group that called themselves the “Gutter Boys” grasped the reinforcement their parents had in shaping them.

They also acknowledged that times were changing.

As religious in the classroom became the exception rather than the rule, the salaries of lay teachers became the major expenditure for Catholic schools.

On a parallel track, the founders of G.B. Charities went from being in position to pledge $1,000 or so, to becoming business executives and community leaders who used their influence wisely, recruiting friends and family to their cause.

G.B. Charities’ sponsorship of a student is for their full tuition through their duration at a school, whether that ends at the sixth, eighth or 12th grade. In return, G.B. Charities demands a similar commitment from students, as it offers a hand up, rather than a hand out.

“In measuring potential, it’s about more than grades,” said Cawley, the president of Riggs, Counselman, Michaels and Downes, a Towson-based insurance and employee benefits provider. “How many times are you absent? How many times are you tardy? We measure the parents’ contribution to the equation, and follow up.”

Members donate not just money, but time, as they screen candidates and then monitor their progress. A solid background is preferred but hardly required, as G.B. Charities has sponsored the Catholic education of several children from Boys Hope Girls Hope, which provides a stable home for at-risk children.

The effort of G.B. Charities can be seen at Archbishop Borders School in East Baltimore, where it sponsored eight students during the 2008-09 school year.

“G.B. Charities has been a lifeline for many of our children and their families,” said Cathy Marshall, the principal of Archbishop Borders. “What better gift can you give children than an emotionally healthy place where they don’t have to fear being who they are?”

G.B. Charities’ presence ranges from grade schools in the city to Loyola Blakefield in Towson, the most expensive boys’ high school in the archdiocese.

“We’re trying to broaden the appeal and diversity of our student body, not just racially, ethnically and geographically, but also socio-economically,” said Michael Breschi, the Loyola admissions director. “That becomes more difficult with each tuition increase, and G.B. Charities helps that effort tremendously.”

Having already funded the education of 120 graduates of Catholic schools, G.B. Charities is expanding its mission, defying an economic downturn that has devastated many larger endowments.

In addition to more than 40 active scholarships on its books for 2009-10, it recently accepted another 15 students, an additional commitment of $125,000 for the coming school year alone.

“We take the contrarian view,” said Rick Bozel, vice president of GB Charities. “We’re not going to slow down, because people need us now more than ever.”