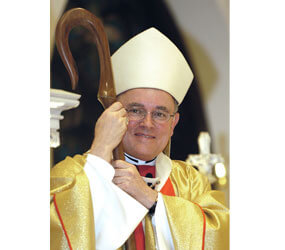 PHILADELPHIA – Archbishop Charles J. Chaput told a crowd of reporters and guests at a July 19 news conference that “what you see is pretty much what you get.”

“I don’t know why the Holy Father sent me here. But I do trust his heart, and I believe in his judgment,” he said, commenting on his appointment as archbishop of Philadelphia announced earlier that morning.

He will succeed Cardinal Justin Rigali. Pope Benedict XVI accepted the 76-year-old cardinal’s resignation and appointed the Denver archbishop, who is 66, to replace him. He will be installed Sept. 8.

“I know other bishops would have been smarter than I am, or more talented, or more connected with Philadelphia’s past,” Archbishop Chaput continued. “I know that Cardinal Rigali is one of the great churchmen of my life. He has served the church with enormous dedication and in ways I will never be able to duplicate.

Many of the questions put to the archbishop by the press centered on the current turmoil in the archdiocese caused by the child abuse scandal and how he would respond to it.

Archbishop Chaput said he has not yet read the Philadelphia grand jury reports detailing the situation, but he intends to do so.

“It would be unfair and foolish to comment on things I do not yet know about,” he said.

He said he has already had discussions with Cardinal Rigali and the bishops but needs to meet the priests and the people.

“No bishop can solve any issues on his own,” he said. “I intend to listen to everybody in the church on the issue of sexual abuse by the clergy. I need to talk to the victims and their families. Everybody should have a voice. Give me time, and I’ll be able to answer questions.”

On the question of statutes of limitation on child abuse cases as it was addressed by the church in Denver, Archbishop Chaput said, “The bishops of Colorado supported elimination of the statute of limitations, so long as it is fair and everyone is treated the same way.

It should not be limited to the church, he said, because the law should “treat everyone the same, without exception.”

Asked about more lay involvement in the church, he pointed to the Archdiocese of Denver where he established a diocesan pastoral council composed mostly of laity.” I look for a wonderful relationship with the laity because I was baptized before I was ordained,” he said.

In answer to a lighter question, Archbishop Chaput, who is Native American, said he has two Native American names, one from the Potawatami meaning “he who makes the leaves rustle like the wind,” and the other from Lakota, meaning “Good Eagle.”

The latter was apt, because earlier in the news conference Catholic high school students presented him with a Philadelphia Eagles shirt and a Philadelphia Phillies baseball cap. They also gave him a basket of Philly munchies with a promise of a cheesesteak when he is installed.

He also volunteered the correct pronunciation of his name is “Chap-you” but he prefers to just be called “Archbishop Charles.”

Cardinal Rigali called the appointment of his successor “a new moment in the life of this local church and so a time of great grace.”

Archbishop Chaput’s ministry “is marked by an evident joy in his priesthood, a fearless proclamation of the Gospel and a clear commitment to Jesus Christ and his church,” he said.

Of his own ministry, “Cardinal Rigali said, “It is a formidable task to be a bishop. I have tried through my ministry to be faithful to the ideal of episcopal ministry, If I offended anyone in any way, I am deeply sorry. I apologize for any weakness on my part in representing Christ and his church worthily and effectively.”

Cardinal Rigali also said the pope has appointed him to be administrator of the archdiocese until Archbishop Chaput’s installation and then he WILL begin his retirement in the Diocese of Knoxville, Tenn.

He was invited to live there by Bishop Richard F. Stika, who was ordained a priest of the St. Louis Archdiocese. When then-Archbishop Rigali was archbishop of St. Louis, then-Father Stika was his secretary and archdiocesan chancellor.

Cardinal Rigali will continue to travel twice a month to Rome, where he serves on the Vatican Congregation for Bishops.