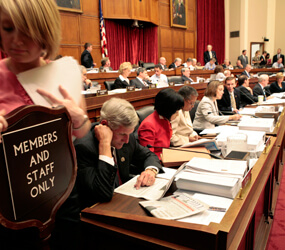 WASHINGTON – As the House of Representatives headed out of Washington for a five-week summer recess, with the Senate soon to follow, members of Congress were vowing to listen to their constituents’ views on health care reform.

But from a Catholic perspective, what should the American public be telling their representatives and senators about what promises to be the hottest topic when Congress returns after Labor Day?

“We need health reform that respects the life and dignity of every person, from conception to natural death,” said Sister Carol Keehan, a Daughter of Charity who is president and CEO of the Catholic Health Association. “That means the unborn, it means the patient with multiple sclerosis, the patient with cancer, the young mother, the addicted, the mentally ill, the dying patient and the frail, frail elderly.”

In an Aug. 3 interview with Catholic News Service, she decried the “deliberate distortions” about health care reform being circulated by “those who for whatever reason don’t want health reform to succeed.”

The worst of the distortions, Sister Carol said, is that CHA and Catholic Charities USA are “working at cross-purposes” with the U.S. Conference of Catholic Bishops on the abortion issue in health reform. All three groups are sending a clear message that health reform must be “at least abortion-neutral” and must include conscience protections for health care professionals and institutions that do not want to participate in abortions or other morally objectionable medical procedures, she said.

Catholic Charities USA also issued a July 31 statement saying “unequivocally” that it “does not support any plan to reform health care and/or any proposed legislative provision that allows or promotes the funding of abortions or that compels any health care provider or institution to provide such a service.”

One problem with the health reform discussions is the sheer breadth and depth of proposals currently on the table. The “health reform bill” to which many commentators refer could apply to any of several proposals; there is no “Obama bill,” since President Barack Obama has left the legislative details to Congress.

In the Senate, the Health, Education, Labor and Pensions (or HELP) Committee has proposed the Affordable Health Choices Act, while a six-member bipartisan coalition within the Finance Committee was expected to work behind closed doors throughout the August recess on the language of its bill.

In the House, three committees – Ways and Means, Education and Labor, and Energy and Commerce – worked together to come up with the America’s Affordable Health Choices Act of 2009, known as the tri-committee legislation, or H.R. 3200.

The major bills have many similarities: The HELP proposal and the tri-committee legislation both would require all individuals to have health insurance and would subsidize the cost for those making up to 400 percent of the federal poverty level, currently $73,240 for a family of three. Employers – except those owning certain small businesses – would be required to offer insurance to their workers or pay a penalty under both plans.

But all the bills have been heavily amended in committee, taking them further from consensus rather than closer to it.

The Senate HELP panel’s bill included “more than 160 Republican amendments” – and an unspecified number from Democratic members – before its July 15 committee approval, according to a committee news release. Each of the House committees also has approved the tri-committee bill, but not without tacking on dozens of amendments.

Catholic advocates and lobbyists were scouring the various bills and amendments in an effort to ensure that the legislation meets the health reform priorities outlined by the USCCB, CHA and Catholic Charities – respect for human life at all stages and universal, affordable access.

“But the fact is that nothing that’s in existence today is likely” to come up for a vote on the House or Senate floor, said Kathy Saile, director of the U.S. bishops’ Office of Domestic Social Development. “There are still other steps to go through.”

An effort to make the Energy and Commerce version of the tri-committee bill abortion-neutral failed July 30, but an alternate amendment proposed by Rep. Lois Capps, D-Calif. – unacceptable because of its abortion provisions – did make some “good progress” toward pro-life goals by stipulating that state laws would not be pre-empted and offering “some good conscience protections,” Saile said.

But more work remains for members of Congress and for Catholics who hope to influence them.

“As Congress goes into recess it’s important for members to hear from the people about the importance of keeping health reform legislation abortion-neutral,” said Deirdre A. McQuade, assistant director for policy and communications in the USCCB Secretariat of Pro-Life Activities. “Especially given the closeness of some of these (committee) votes, it’s clear that every vote matters.”