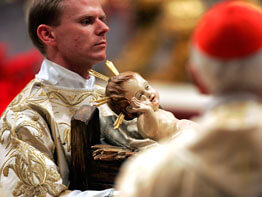 VATICAN CITY – The well-being of individuals and society depends on healthy families, Pope Benedict XVI said on the feast of the Holy Family of Jesus, Mary and Joseph.

The pope’s message – given in Italian and Spanish – was broadcast live via satellite-television linkup to a rally of more than 1.5 million people in Madrid, Spain, supporting traditional families.

“I invite Christian families to experience the loving presence of the Lord in their life,” the pope said in Spanish. He encouraged them to “pay witness before the world to the beauty of human love, marriage and the family.”

Pope Benedict said God made the institution of the family holy when he showed he wanted “to be born of a woman, the holy Virgin, and come into this world the same way all people” are born.

In a Christian home, a wife and husband find their proper vocation “in being witnesses of the faith and love of Christ to one another and to their children,” he said, quoting from “Lumen Gentium,” the Second Vatican Council’s Dogmatic Constitution on the Church.

“The good of the person and society is intimately linked to the ‘healthy condition’ of the family,” he said, citing “Gaudium et Spes,” the Pastoral Constitution on the Church in the Modern World from Vatican II.

He said the family, which is “founded on the indissoluble union between a man and woman, represents the privileged environment where human life is welcomed and protected from its beginning to its natural end.”

“For this reason parents have the right and the fundamental duty to educate their children in the faith and moral values that give dignity to human existence,” he said.

The Madrid rally to support Christian families was promoted by Cardinal Antonio Rouca Varela of Madrid and his archdiocese. Kiko Arguello, founder of the Neocatechumenal Way, organized the event with a variety of church movements and communities.

Arguello told Vatican Radio Dec. 29 that the traditional family in Europe is under “mortal attack.”

Divorce proceedings have been eased in some countries, including Spain, which passed a bill in 2005 reducing the waiting time before a divorce is granted from at least a year to between three and six months.

He said since the “divorce-express” measure came into force in Spain, “in six months, 100,000 families have separated and divorce has risen 75 percent.”

“Christian families need support because we are a minority; we are in a very serious situation” of broken families and people ending up alone in their old age, he said.

Since the Socialist party won elections in 2004, Spain’s Parliament also has approved a bill allowing same-sex couples to marry and adopt children.

Arguello told Vatican Radio that the rally was “a big party” and celebration with no political or “polemical” motivations. Spain’s general elections are more than two months away.