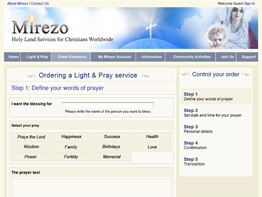 JERUSALEM – A new Web site set up by a group of Palestinian and Cypriot Christians has allowed thousands of Christians worldwide to virtually light a candle at the Church of the Annunciation in Nazareth.

“There are many Christians who are not able to come to the Holy Land for lack of money, lack of time or security considerations. The Web site allows them, in real time, to watch as a priest lights a candle in their name and says their individual prayer,” said Said Salem, the businessman and tourism consultant who conceived of the idea. “They can feel like they are in the church with the priest lighting the candle.”

The idea for the nonprofit Web site came to him during Pope John Paul II’s 2000 pilgrimage to the Holy Land, he said, when friends and acquaintances abroad began calling him and asking him to light a candle or say a prayer for them while the pope visited Nazareth. He realized then that for many Christians around the world it was truly difficult to make a pilgrimage to the Holy Land and pray.

He came up with the idea of the Mirezo site – www.mirezo.com – as a way to allow these Christians to have their prayers said at the Greek Orthodox Church of the Annunciation.

For $10 someone can watch in real time as a priest lights a candle and says the specific prayer requested on the day and time of the person’s choice. No one else is able to view the lighting of someone else’s candle, assuring the complete privacy of the prayer and the moment, said Salem.

Since its inauguration in March, the site has had more than 20,000 visitors with thousands of Christians – 70 percent of them Catholic – requesting the lighting of a candle, he said.

Prayers have ranged from wishes for health and success to the safety of American soldiers in Iraq and Afghanistan. One family asked for a candle to be lit for their young daughter who is missing, he said. After hearing of the family’s plight, Mirezo workers also donated to the search campaign for the young girl, said Salem.

No profit is made from the site, he said. Funds are used to support the highly technical equipment needed to allow for the real-time lighting of the candle and the upkeep of the Web site, and a large portion of the proceeds are donated to the Christian community in Israel and the Palestinian territories.