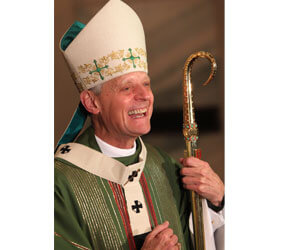 WASHINGTON – Cardinal-designate Donald W. Wuerl, the archbishop of Washington, asked worshippers at an early morning Mass Oct. 20 to pray for him “as a bishop, a teacher, a servant of the church, now with this special tie to the Holy Father, linking all of us together in that great body of Christ.”

He was celebrating his first public Mass after being named to the College of Cardinals by Pope Benedict XVI earlier in the morning.

Speaking at the Cathedral of St. Matthew the Apostle in Washington, the cardinal-designate said his new title is a recognition of the vitality of the faith of the people of the Archdiocese of Washington and the importance of the Catholic Church in the nation’s capital and in the five surrounding Maryland counties.

After Communion, he told how he once explained to a nephew what a cardinal does and what the cardinal’s red hat signifies.

“You get a new hat. … If you look at the hat, it’s the same size and shape as the one the bishop has,” he said, telling his nephew that a cardinal still keeps the same basic job he has as a bishop, “to be a teacher of the faith, shepherd the flock and celebrate the sacraments. The color changes to show this very special tie the bishop has with the Holy Father.”

Later, as Cardinal-designate Wuerl processed from the altar, the small congregation applauded him, and they congratulated him as they left the downtown cathedral.

In a news conference after the Mass, the cardinal-designate praised the faith of the people of the archdiocese and of U.S. Catholics. He noted how Pope Benedict, after his 2008 pastoral visit to Washington, told him: “I came to America to confirm them in their faith, and they have confirmed me in my faith.”

Cardinal-designate Wuerl said he takes “great hope” from the witness of faith he has seen in his four years as archbishop of Washington.

“One of the unique qualities of this church, which we sometimes take for granted, is it’s such a cosmopolitan church. When you look out at the congregation, you see a slice of the world, the faith of the world, with people from every ethnic background here. That’s one of the strengths of the church of Washington and Maryland,” he said.

Their faith gives him hope, he said, because “when you see people from every continent, every background, praying together, working together, it says it can be done.” That kind of faith and unity, he said, can build a better world.

The cardinal-designate recalled the preparation for Pope Benedict’s visit, “when we were able to transform Nationals Park into a church for one day. When the pope looked up from the altar, we wanted him to see the face of the church of America, all the diversity, all the backgrounds. It’s a great gift, a witness to the world.”

On a personal note, the new cardinal said that no matter what bloggers write or what the rumors are, “when you get that call” from the papal nuncio about being named a cardinal, “it’s a surprise.”

Earlier that morning, Washington’s new cardinal had called his niece who has three children, and she reacted to the news of his appointment by saying, “Wow!”

Cardinal-designate Wuerl smiled and added, “This is something I feel as well, a great excitement, a great joy.”

Washington’s new cardinal paid tribute to the roots of his faith in Pittsburgh, where he was born 69 years ago and where he served as a priest and later as bishop for 18 years.

“I grew up there. The great love I have for Pittsburgh is rooted in the fact I was born there, that’s the church that nurtured my faith, saw me grow up and helped me appreciate Jesus Christ,” he said, adding, “I say that in the context of my new home, my new love.”

Cardinal-designate Wuerl, who is known as a teaching bishop, said he hopes his new rank will give him a “wider platform” to talk about the importance of faith, Catholic education, bringing the Gospel to the public square, and especially promoting the work of the new evangelization, the topic of his recent pastoral letter.

He said he hopes to help inspire Catholics to deepen their faith, and encourage them to bring Christ’s love to people who have drifted from the faith or who haven’t heard Jesus’ good news.

“The message is a simple one, that God loves us and sent Christ to us, to show it’s possible to love one another,” he said.

Encouraging Catholics to take up that work of the new evangelization and share Christ with others will be a key goal of his as a cardinal, he said.

“I do look forward to having a wider platform, a bigger pulpit, to proclaim the importance of the new evangelization,” he said. He noted that the work of the first disciples must now be undertaken by today’s Catholics, to bring Christ to the world. “It’s our turn now, to tell the story.”

“Cardinal-designate Wuerl has been a passionate proponent and leader in Catholic education and is a strong believer in America’s religious freedom as foundational to our country and our future,” she said.

Russell said Cardinal-designate Wuerl’s most recent pastoral letter on the New Evangelization “shines a light on a new path for the Catholic Church into the future.”

“It is an honor for the Conference staff to serve the Church under the leadership of Cardinal-designate Wuerl,” she said, “whose wisdom and vision serves as an example to all the faithful as we teach and advocate in the public square.”