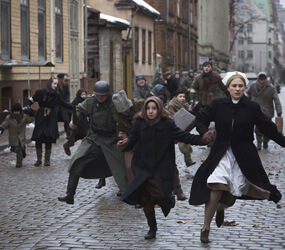 WASHINGTON – Renata Zajdman never knew who it was who got her spirited out of the Warsaw ghetto in Poland at age 13.

That is, until 1993, when Zajdman was 65 years old and Irena Sendler, the Polish Catholic woman responsible for the rescue, was already a frail woman of 83.

“I attended a conference in Warsaw. It was the 50th anniversary of the Warsaw uprising,” Zajdman said. “She came – not a giant, less than 5 feet tall – and she gave an amazing speech. I was very close to the lady when I found out she was one of those rescuers.”

Sendler’s story has been filmed as a “Hallmark Hall of Fame” movie, “The Courageous Heart of Irena Sendler,” to be shown Sunday, April 19, 9-11 p.m. EDT on CBS.

When World War II started and the Nazis herded Warsaw’s Jews into a filthy, crowded ghetto, Zajdman “knew everything, remembered everything” about the experience, she said in a telephone interview with Catholic News Service from her home in Montreal.

But “I did not know who was organizing the rescue,” she added. “It was dangerous to know.”

Zajdman said she has been back to Poland 35 times, making a nearly annual pilgrimage since her first return there in 1973. She said she wanted to “face my past, find out really what happened. Slowly I wanted to find out what people helped me, say ‘thank you. I’m alive.’ That was my agenda.”

Since her first meeting with Sendler in 1993, she was “going back and spending a lot of time with her,” Zajdman said. “She sort of helped me to understand many things that had happened to me.”

Sendler is credited for having saved 2,500 children who lived in the Warsaw ghetto by smuggling them out, giving them false identity papers, and placing them in the homes of predominantly Catholic families who lived outside the ghetto.

“My Polish was very impeccable. I had to pose as a Polish Catholic. I had to learn the prayers,” recounted Zajdman about the circumstances of her own rescue.

Sendler “started saving people in 1939,” Zajdman added. “As soon as the Germans occupied Poland, she was not allowed to help the Jewish community. Of course that didn’t stop her.”

In 1965, Sendler was recognized by Yad Vashem as one of the Righteous Among the Nations. Pope John Paul II, a fellow Pole, wrote her a letter in 2003 praising her efforts. Sendler was nominated in 2007 for the Nobel Peace Prize.

At the time of her death at age 98 in 2008, she was believed to have been the last survivor of the Children’s Section of the Zegota Council for Assistance to the Jews, which she had headed from January 1943 until the end of World War II.

Her heroism came at a cost. In 1943, Sendler was arrested by the Gestapo, severely tortured and sentenced to death, all of which is depicted in “The Courageous Heart of Irena Sendler.”

Zegota saved her by bribing German guards on the way to her execution. She was listed on public bulletin boards as among those executed, and stayed in hiding, helping Jewish children from the sidelines until the war was over.

Zajdman said Sendler was one of many examples of Polish Catholics helping Jews during World War II.

By the same token, though, “greed is a very powerful motivator. For (turning in) a Jew you get a bottle of vodka or a pound of sugar,” she said. “For a lot of them (Polish Catholics), that was all the rationalization (they needed). Irena, she had to save me from other Poles. … If you know one side, you have to know the other side. There were a lot of people who betrayed (others). Irena herself was terrified of Poles.”

The U.S. bishops’ Office for Film & Broadcasting gave the “Irena Sendler” movie its endorsement. “Young viewers would obviously profit from this thoughtful portrait of an exemplary good Samaritan,” said a review by John Mulderig, a staff critic in the office.