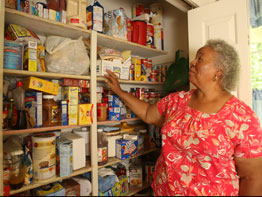 The first dinner Gladys Kemp made for the priests at St. Alphonsus Rodriguez in Woodstock didn’t turn out too well – she burned the meal.

In the nearly 31 years since, however, Mrs. Kemp has been nourishing the stomachs, as well as the souls, of those who have dined at the parish in western Baltimore County.

Mrs. Kemp was a young mother when she inquired about a part-time position as cook and cleaning person at St. Alphonsus.

“I told them, ‘I can cook for my own family. I don’t know what kind of food you like, but I’d like to try,’ ” Mrs. Kemp said, who grew up attending the church and had several relatives work at the parish and seminary there.

She was hired to take care of the two priests residing there at the time, Father Frank Carmody, S.J., and Father Richard Harper, S.J., and remembers a bumpy first day on the job.

“He (Father Carmody) asked me to make stuffed green peppers,” she said. “I’d never made stuffed green peppers in my life. I called my daughter and told her to get on her bike and bring me my cookbook. Well, I burned them. I told them I can cook better than that, and they said, ‘We’ll give you another chance. We really need a cook.’

“After that first day, things got a lot better.”

Since then, Mrs. Kemp, 66, has been a steadying presence at the rectory, offering home-cooked meals, a warm smile and an easy laugh for generations of Jesuits.

There have been as four priests sharing the rectory, and Mrs. Kemp coolly reacts to additional guests. When Archbishop William D. Borders would visit, it meant several extra mouths to feed.

“I’ve had to make dinner for eight or nine people, all by myself,” said Mrs. Kemp, who cooks Monday through Friday. “I come in at 3 and dinner needs to be ready at 5:30. The only way you’re going to get anywhere is with patience and faith.”

Over the years, Mrs. Kemp has become renowned for her meatloaf and oatmeal cookies. She started making the latter after one of the priests offered her some store-bought cookies.

“I make whatever they like,” she said. “Father Harper used to like lamb chops, but Father Carmody did not, so I used to make them when he wasn’t there.”

Different priests have had their favorites, and a few have suffered in silence.

When Father John LeBoone was pastor, he and his assistant, Father John Keenan, ate salad every day with dinner.

“He (Father LeBoone) loved salad,” Mrs. Kemp said. “When Father LeBoone died, the other (Father Keenan) said, ‘Don’t give me anymore salad. I don’t like it.’ I said, ‘You shouldn’t have been eating it all those years.’”

The priests are on their own on the weekends, although Mrs. Kemp sometimes makes enough for leftovers.

“It’s always a relief to have Gladys here cooking,” Father Lacey said. “I wouldn’t want to subject others to my cooking.”

The job was a perfect fit for Mrs. Kemp, who was raising six children when she sought a job close to home.

“This way, I could take care of them (her children) and make some money,” ,” said Mrs. Kemp, who consistently prays to St. Anthony to help her find lost items.

Her children are grown, but most still live nearby.

Mrs. Kemp has helped bring that family atmosphere to the rectory.

“I have been taking care of them for near 31 years,” she said. “I’ve always had nice bosses.”