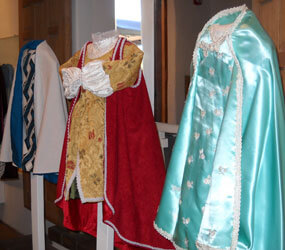 SANTA FE, N.M. – A 384-year-old local tradition of reverence and devotion to a 30-inch wooden statue of Mary has crossed over into New Mexico’s museum culture with the opening of “Threads of Devotion: The Wardrobe of La Conquistadora,” displaying a sample of the hundreds of garments in the statue’s wardrobe.

The exhibit at the Museum of Spanish Colonial Art will run through Dec. 31, offering a rare chance to see costumes, jewelry and crowns bestowed upon the statue. The image has been revered by the people of Santa Fe since it arrived in 1626, on a wagon train from Mexico with Franciscan friar Alonso de Benavides, the new custodian of the region’s Spanish missions.

The extensive collection of gowns, capes and other garments has been forming since soon after the statue came to Santa Fe. Church records from 1686 reflect an inventory of dresses made of silk and satin, some with trim of gold coins, as well as strings of pearls, gold and silver earrings and a filigree cross, noted the program from the Sept. 10 opening of the exhibit.

While the use of clothing on statues is unusual in the United States, it was traditional in parts of in Europe in the past and is common in Latin America today.

The care of the costumes and how they are used is managed by Terry Garcia, a member of the Cofriada of La Conquistadora, a confraternity devoted to the care of the statue, among other roles supporting the local church. Garcia has been sacristan for the statue and the collection for five years.

Two walls of a section of the well-secured sacristy at the Cathedral Basilica of St. Francis of Assisi are lined with cabinets used to hold the dresses and capes, divided by color: blues, golds, whites, reds, greens, etc. A safe secures gold and silver crowns, turquoise necklaces, scepters and other valuable accessories.

The day after the museum opening, Garcia was locking away a cross encrusted with diamonds, sapphires and pearls, which would be used the next day for the procession of the statue around the historic center of town during Santa Fe’s annual fiesta. The cross would be returned to the museum exhibit after the fiesta.

“It’s hard for some people to understand it,” Garcia acknowledged. “But the devotion and love for the mother of God is what has captured my heart.”

Her job as sacristan includes periodically changing how the statue is dressed, caring for the garments and accessories and working with people who wish to donate an item to help in its creation and ensure it’s appropriate. The museum exhibit includes an example of the standard dress pattern.

“There is always a devotion attached to the gift,” she said, “whether it’s a plea for intervention with an illness or with discerning a vocation, or to keep someone safe.”

The fabrics and styles used vary widely. Those on display at the museum include elaborately brocaded silks, Navajo woven wool and ermine, made from the skins from animals captured by villagers of Holy Cross, Alaska. One blue gown donated by a Santa Fe parish was constructed of fabrics from a deacon’s stole and an altar cloth.

Another garment was fashioned from a ceremonial cape worn by Santa Fe’s first bishop and archbishop, Jean Baptiste Lamy, in the mid-19th century. Yet another in simple khaki was made from a military uniform donated by Franciscan Father Angelico Chavez, who served as a chaplain during World War II and the Korean War. Father Chavez later became archivist for the Santa Fe Archdiocese and wrote a book telling the statue’s history as an autobiography.

One of the more elaborate gowns and an ornate crown made of three types of gold with more than 70 precious stones festooned the statue for its papal coronation in 1960, when La Conquistadora was named queen and patroness of “the ancient kingdom of New Mexico and its villa of Santa Fe” by a representative of Pope John XXIII.

Many are the offering of individuals or a family, like the first gown that Garcia helped see to completion.

That outfit in royal blue was contributed by a family whose son was suffering from colon cancer. After helping the family pick out the fabric with an eye toward something suitable for Advent, Garcia invited them when the day came for La Conquistadora to wear it.

“We always pray before we start,” she explained. “The son stood in front of the statue and prayed quietly at first and then out loud, asking for peace.”

Garcia said she thought the young man immediately seemed more relaxed. “He passed away about a year later, but I’m convinced he was at peace because he trusted Our Lady.”

Originally carved and painted as an image of Our Lady of the Assumption, the statue’s exact origins are unknown. Tree-ring dating has put the age of the European olive or willow wood at between 552 and 462 years old. Over the years, it has been altered by its caretakers, for instance by having its arms cut off to facilitate putting clothes on the statue and to make it possible to put an image of the baby Jesus or a scepter in its arms. A major restoration in 1930 repaired some of the damage.

A replica was made in 1933. That version, called La Peregrina, or The Pilgrim, is now used in most of the annual processions and displays of the statue in other churches or the museum. The original Conquistadora only comes down from its perch in a side altar of the cathedral for an annual novena and the procession during the late summer Fiesta.

The statue was adopted as the patroness of the local Confraternity of Our Lady of the Rosary in the mid-1650s. By then it was popularly known as La Conquistadora, or the conqueror, a term also used to mean “win over one’s affections.”

The name solidified after Gen. Don Diego de Vargas led an expedition in 1693 to retake Santa Fe after the native Pueblo Indians forced the Spanish settlers to leave 13 years earlier. They took the statue when they left and kept it at their side during a weeks-long battle to recapture the settlement.

Since then, the devotion of the people of Santa Fe to La Conquistadora has remained steady, Garcia said.

She talks of the statue as “she,” describing what she believes is Mary’s resistance to certain ideas for clothing the image, or of Mary’s guidance in deciding how to dress the statue.

“She directs me,” Garcia said, explaining that as she goes about her routines before changing the statue’s attire she keeps up a sense of prayer, asking for insight. Someone will inevitably come forward with a special need whenever Garcia is conflicted about what La Conquistadora will wear.

There’s one peach-colored gown that Garcia said she has planned repeatedly to put on the statue, “but every time someone intervenes, asking, ‘Could you put this on her?’ ” She’s beginning to think Mary dislikes the dress.