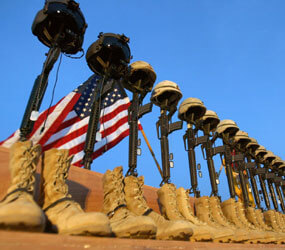 WASHINGTON – When President Barack Obama announced plans Oct. 21 to pull the 44,000 U.S. troops out of Iraq by the end of the year, perhaps no one on Capitol Hill was more pleased than Rep. Walter B. Jones.

The conservative Republican from Farmville, N.C., has been pushing the Obama administration to end the military occupation of Iraq since the president took office in 2009. To be fair, he pressed President George W. Bush to do the same for nearly five years.

Surely, that’s a bold stance for someone whose congressional district is home to Camp Lejeune, the country’s largest Marine Corps base, as well as tens of thousands of retired military veterans.

Jones, who was born a Baptist and became a Catholic in 1977, told Catholic News Service in his office in the Rayburn House Office Building that he opposes the Iraq War because of his Christian values. It all started, he says, soon after the March 19, 2003, U.S.-led invasion to oust Saddam Hussein on grounds that the long-serving dictator possessed weapons of mass destruction and was poised to use them against American allies.

But until then, Jones approved, at least politically. He was among the majority in Congress who voted in October 2002 to authorize the use of force in Iraq.

However, he now maintains that the Iraq invasion was pursued under the guise of deceit, fed by misinformation and the manipulation of intelligence by key leaders of the Bush administration. He also sees no need for U.S. troops to remain in Afghanistan because al-Qaida’s Osama bin Laden was killed in May.

Bush and key members of his administration have denied repeatedly that intelligence was manipulated or manufactured to support the cause of war. They have said to the best of their knowledge the information gathered indicated that weapons of mass destruction had been built and warehoused throughout Iraq.

Jones has been among Congress’ most vocal critics of the wars. He has teamed with Jim McGovern, D-Mass., liberal Rep. Dennis Kucinich, D-Ohio, and conservative Rep. Ron Paul, R-Texas, in introducing legislation calling for the pull out of U.S. troops from Iraq and Afghanistan. His position has cost him standing with fellow Republicans, having been passed over for a leadership position on key subcommittee of the Armed Services Committee.

Jones, 68, said he’s at peace with his stance and how his life has unfolded over the past eight years.

He also said he’s trying to make amends for his vote through a self-imposed penance: writing to the families of each and every soldier killed in those two far-off conflicts.

By his count, Jones has signed more than 10,400 letters – and counting – to the families of the approximately 5,500 military personnel who have died in Iraq and Afghanistan since late 2003.

“This was my way to say to God, ‘Forgive me for not trusting you,’“ he said.

A member of St. Elizabeth Parish in Farmville, Jones admits that political considerations and an eye toward re-election won out over concerns that the Bush administration was not telling the whole story to Congress and the American people.

“I just didn’t believe it,” he explained of the Bush administration’s reasoning for going to war. “I’ve always said I should have trusted God and voted my conscience. … But knowing that I don’t have a military background and all those retired military veterans in the third (congressional) district, the three military bases, most of the veterans in my district were buying what was being said.”

It wasn’t long before Jones had misgivings about his vote. He said he realized his vote helped send innocent men and women to their deaths for a dubious cause.

It took the funeral of a 31-year-old Marine Sgt. Michael Bitz, killed four days after the invasion began, to get Jones to act. At the funeral at Camp Lejeune Jones on a warm day in April 2003, he met Bitz’s family, including wife Janina, sons Christian, 7, and Joshua, 2, and twins, a boy and a girl, born one month after he was dispatched to the Persian Gulf. Janina read Michael’s last letter to her, written the day before he died in a gunfight.

“The important part of the letter I will never forget,” Jones recalled. “It was three pages and of course, she’s emotional reading certain parts. It brings tears to her eyes. I’m sitting there myself crying.

“He said in the last paragraph, and I’m paraphrasing. ‘I do not know what God has in store for me, Janina, but whether it’s on earth or in heaven we will be together again. I’ve always been faithful to you. Love, Michael.’

“So when I leave Camp Lejeune I’m asking God, ‘What am I supposed to take back from this?’ It all reminds me of my weakness of not trusting God. Here I am a pro-life person, and isn’t that 18- or 19-year-old just as much a gift from God as a baby in the womb?”

It turns out that since he went public with his views on the wars, Jones’ fears about challenges to his political career have not materialized; he has been re-elected four times, each by an overwhelming majority. Primary opponents have tried to capitalize on his anti-war position, but without much success.

His opposition to the wars hardly is indicative of his support for the military. His office is full of photos and memorabilia of soldiers from around the country. Ask him about any one of the pieces and he begins telling the story behind it. He said he feels an obligation to keep the stories of the brave young men and women serving in the military alive. Among them is the dog tag of Army Spc. Matthew Creed, 23, of Covina, Calif., who was killed by a sniper while on foot patrol in Baghdad in 2006.

Jones continues to push to uncover what he sees as the need to tell the truth about the lead-up to the Iraq invasion. His goal is to see a commission formed to investigate how the Bush administration came to its conclusions. It’s the least the country can do for the mothers and fathers and spouses and children of the thousands who died far from home, he said.

“I am just sick and tired of people sending young men and women to die when it’s not justified.”