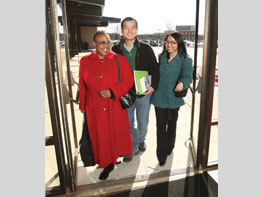 The center of the Catholic Church surrounded Lisa Russell.

Living in Italy with her then-husband in the late 1990s, Ms. Russell walked around the Vatican and felt something move within her. A life of contemplation compelled her to look closer at the majesty of the church.

“It was an overpowering experience for me,” she said. “Walking into St. Peter’s Basilica was just fascinating. I felt the spiritualism inside Vatican City.”

The visit was a tipping point in the spiritual exploration of Ms. Russell, who had been raised in a Pentecostal church.

A decade later, she and many others in the Archdiocese of Baltimore are studying what it means to be Catholic.

The Catholic Review is chronicling the months-long faith journey of Ms. Russell and three others – Gwen Walton-White, Gene Luong and Sonia Bui – who have chosen to become full members of the Roman Catholic faith.

Their weekly education will culminate April 11, when they receive the sacraments of initiation during the Easter Vigil.

Catechumens will receive baptism, Holy Eucharist and confirmation. Candidates, those already christened, could receive Communion, confirmation, or both after months of participation in the Rite of Christian Initiation of Adults program.

Sharon Bogusz, coordinator of the archdiocese’s evangelization and adult catechesis ministry, said the church has been waiting with open arms.

“Today we often hear that there are many people seeking spirituality and something more concrete,” Ms. Bogusz said. “The RCIA offers seekers a place to ask questions, to develop an awareness of God and a community of faith that passionately works to build God’s kingdom of justice and love.”

The thought of receiving the sacrament of reconciliation brings Ms. Russell to tears.

“I believe that it creates a bond between you and your priest,” the 41-year-old Lutherville resident said inside a cozy room at Sacred Heart, Glyndon. “I believe it will be very comforting when I actually do it. I don’t feel the slightest bit intimidated by sharing the things I need to confess. I’m ready for it.”

Ms. Russell said her Pentecostal family was “very spiritual.” She knew the Scriptures intimately. Unlike many of her teenage friends, she didn’t choose to be baptized, which she said required speaking in tongues.

In her previous tradition, Ms. Russell felt others “berated” her for her mistakes, something not lost on Sister of St. Joseph Jude Cianfrogna, the RCIA leader and pastoral associate of Sacred Heart.

“She grew up in her life thinking there’s no hope,” Sister Jude said. “There’s more than hope. That’s why the faith is so wonderful. No matter how unworthy we feel, there’s always Jesus.”

Ms. Russell had admired Catholicism from afar since her friends were members. She ached for something intimate.

“For years, I witnessed the bond between families and perhaps saw something my family was lacking,” she said. “I wanted to understand what that bond was and how it was created.”

Despite not having been baptized, she always considered herself Christian because of her years of worship. She has immense respect for the Eucharist and the Blessed Virgin Mary, whom she prays to regularly.

Ms. Russell’s childhood friends were parishioners of Sacred Heart. When she visited one day last fall, she felt like she did in St. Peter’s – at home.

She called Sister Jude to inquire about taking part in RCIA. Conveniently, Sister Jude was meeting with potential Catholics that night.

Now two months from one of the biggest days of her life, she’s giddy with excitement. Life is about to begin anew.

When Peter Barbernitz, coordinator of the RCIA program at St. John the Evangelist in Columbia, hosted a group of people inquiring about becoming Catholic last January, Mrs. Walton-White and Mr. Luong were among the curious.

“We tell them they’re not going to swallow the ocean in one big gulp,” Mr. Barbernitz said. “We’re going to move slowly and appropriately.”

A year later, both stand on the precipice of joining the church.

“Every week, I find myself more drawn to it,” Mr. Luong said. “I’m learning so much more than I thought. I can’t explain it actually. It’s filling the hole I was looking for in my life.”

He hopes to be baptized, receive the Holy Eucharist and be confirmed.

“The more I learn, the more it’s going to mean to me,” he said serenely.

When Mr. Luong married Ms. Bui a few years ago, he had no problems with their future children being baptized. She didn’t push her faith on Mr. Luong, but quietly hoped he would join. Sometimes he accompanied her to church.

Mr. Luong, 27, was a self-described agnostic whose parents were Buddhist. He, though, wasn’t raised in their traditions. Eventually, he felt there was something large orchestrating the universe.

Ms. Bui was not confirmed when she was younger, so she, too, is taking the RCIA course to complete her own sacramental journey.

“I hadn’t thought about it too much, but it’s going to be really cool (to be confirmed together),” Ms. Bui said.

During a recent Sunday morning RCIA session, Mrs. Walton-White sat a few feet from the happy couple ready to learn and complete her eucharistic and confirmation studies.

Mrs. Walton-White, 63, was baptized in the Baptist faith and eventually attended an African Methodist Episcopal church. She was uncomfortable.

“I was finding that what I was seeing was a show,” Mrs. Walton-White said. “What I wanted was religion.”

Yearning to be at Mass, she would nudge her late husband to take her on Sunday mornings.

“I was feeling closer to God in the Catholic Church than I was feeling in any other church,” she said. “I decided I wanted to try and see if this is what I really want.”

She, like many adults entering the faith, has questions. Although many of the Christian faiths share common beliefs, there are stark differences.

March 1 looms large, as Ms. Russell and Mr. Luong will take part in the Rite of Election for catechumens, and Ms. Bui and Mrs. Walton-White will participate in the Call to Continuing Conversion.

“This is a very serious moment,” Sister Jude said. “People all over the world will be doing what they’re doing.”

Next month: The Catholic Review follows the catechumens and RCIA participants one month from Easter.