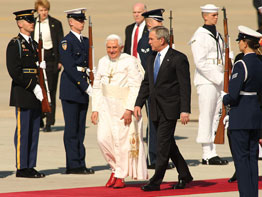 Robert Morgan, a 19-year-old St. Timothy, Walkersville, parishioner and member of the United States Navy Ceremonial Guard, was one of the first Americans to see Pope Benedict XVI as he set foot on American soil, April 15.

“I could have touched him if I stuck out my arm,” said Mr. Morgan, explaining how close he was to the pontiff.

Mr. Morgan said five branches of the military (U.S. Army, U.S. Marines, U.S. Navy, U.S. Coast Guard and the U.S. Air Force) formed a cordon (line of troops enclosing an area) and stood at strict attention with their rifles as the pope exited the plane.

“It is the coolest thing I’ve ever done since being in this command,” said Mr. Morgan, who was hand-selected from boot camp to participate in the U.S. Navy Ceremonial Guard.

Mr. Morgan said he underwent an eight to 10 week training session to learn how to stand properly with his rifle.

“It was a five-minute ceremony (with the pope), but there were hours upon hours of training that went into it,” said Mr. Morgan, noting that the military are not permitted to show any expression on their faces and must hold their rifles “just so.”

While he had the opportunity to see both the pope and President George W. Bush for the first time, Mr. Morgan said the U.S. Navy Ceremonial Guard is also present at funerals – giving honors to the “world’s greatest soldiers” – and other ceremonies.

“The ceremonies we participate in are very honorable,” Mr. Morgan said. “It’s well worth it.”