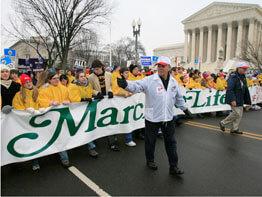 WASHINGTON – Now in its 35th year, the March for Life has accumulated a variety of events associated with it. Some events draw big names. Others draw big crowds.

But for Nellie Gray, who founded the March for Life, the march itself is still the high point, and the reason behind all of the other events. A march to Capitol Hill always follows a rally that features a host of speakers and is held several blocks away.

“As far I’m concerned … the reason we are coming on Jan. 22 to Washington officialdom in the middle of winter is to make certain that all three branches of the government – legislative, executive and judicial – know that Jan. 22 is an infamous day,” Gray told Catholic News Service in a Jan. 9 telephone interview.

Jan. 22 is the anniversary date of two Supreme Court decisions that legalized abortion. It’s also the march date; this year it falls one day after the federal observance of the Rev. Martin Luther King Jr. holiday.

“We have to overturn Roe v. Wade and we have to educate them about the humanity of the preborn child,” Gray added. “The thing that is most visible, even in the middle of winter, is this visible, continuous presence. … There is a body of America that says Roe v. Wade must be overturned because you’re killing our people. It’s a crime against humanity.”

Roe v. Wade and its companion case, Doe v. Bolton, are the 1973 Supreme Court decisions that legalized abortion virtually on demand in the United States.

Gray told CNS she was not counting on the Supreme Court to reverse the 35-year-old decisions.

“There seems to be some understanding at least of the enormity and viciousness of abortion” on the high court, Gray said.

Last year in a joint decision in the Gonzales v. Planned Parenthood and Gonzales v. Carhart cases, the Supreme Court upheld the constitutionality of the federal ban on partial-birth abortion, in which a live fetus is partially delivered. An incision is made at the base of the fetus’ skull, through which the brain is removed, and the dead body is delivered the rest of the way.

But the justices, according to Gray, said that “even if a doctor who was concerned about being subject to the (partial-birth abortion) ban … could put an injection into the fetus (in the womb) and deliver a dead fetus. … To me, that is not a welcome response from the court.”

By “trying to persuade Washington officialdom” on the sanctity of human life with the march, better legislation can come about, Gray said. The march is necessary in this presidential election year, she added, “to get education to the candidates and get them information on the life principles that life begins at fertilization and of equal care for mother and baby.”

When the U.S. Park Police issued crowd counts – they stopped the practice after disputes arose over the size of the Million Man March in 1995 – their estimates of March for Life crowds were considerably lower than that of march organizers. Last year Gray estimated the crowd at “well over 100,000.”

This year, the March for Life organization asked marchers to be in place on the National Mall by 11:30 a.m. so an accurate count could be issued by noon.

“I do have someone working to try to get an accurate count,” Gray said. “It used to be easier when we were on the Ellipse, but the Mall is so big that we literally block off areas, and we’re thinking that there is an estimated number of people here, there and yon and try to put something together.”

March for Life officials organized a “March-a-Thon” in which marchers can collect pledges for their walk from “pro-lifers back home who would like to do their part to promote the pro-life cause,” according to March for Life promotional material.

A March for Life convention was scheduled for Jan. 20-21 at a Capitol Hill hotel. The evening of the march, after the walk to Capitol Hill to demonstrate in front of the Supreme Court building and the Capitol and to lobby lawmakers, the March for Life’s Education and Defense Fund planned to hold its 26th annual Rose Dinner.

The Basilica of the National Shrine of the Immaculate Conception scheduled its annual march vigil Mass Jan. 21 for 7 p.m., with Cardinal Justin Rigali of Philadelphia, chairman of the U.S. bishops’ Committee on Pro-Life Activities, as the principal celebrant and homilist. Confessions, rosaries, holy hours, the Liturgy of the Hours and litanies were to fill the overnight hours until a 7:30 a.m. Mass Jan. 22 to be celebrated by Cardinal Daniel N. DiNardo of Galveston-Houston.

The Archdiocese of Washington was to host its annual Rally for Life and Youth Mass Jan. 22 at 8:45 a.m. at the Verizon Center, the site of pro basketball and hockey games, followed by a 10 a.m. Mass to be celebrated by Archbishop Donald W. Wuerl of Washington.

In other Washington-based events:

– Students for Life planned a leadership conference Jan. 20 at The Catholic University of America in Washington.

– The Cardinal O’Connor Conference for Life for college and high school students was set for Jan. 20-21 at Georgetown University in Washington, opening with a “Luau for Life.”

– The National Pro-Life Religious Council planned to present Gray and the Rev. Johnny Hunter, national director of the Life Education and Resource Network, with Pro-Life Recognition Awards the morning of Jan. 22. As of Jan. 9, no site had been named to host the morning awards ceremony and concurrent National Memorial for the Preborn, although organizers hoped to secure a site on Capitol Hill.

Elsewhere, the fourth annual Walk for Life West Coast was set for Jan. 19 at Justin Herman Plaza in San Francisco. The event, which has drawn thousands in past years, is held the Saturday closest to the Roe v. Wade anniversary date.

In New York, Cardinal Edward M. Egan was scheduled to be the celebrant and homilist Jan. 20 at an annual Mass for the pro-life movement.

Bishop John W. Yanta of Amarillo, Texas, whose resignation was accepted by the pope Jan. 3, declared Jan. 22 as a day of fast and abstinence in the Amarillo Diocese.

“Pray for the overthrow and repeal of Roe v. Wade,” he said in a column in the Dec. 16 issue of The West Texas Catholic, diocesan newspaper. “It will happen! Prayer is the greatest power on earth! Make Jan. 22 a day of repentance and reparation.”