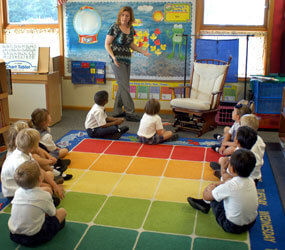 INDIANAPOLIS – Catholic elementary schools in Indiana are experiencing increased enrollment this year in part because the state’s new school voucher program has enabled more than 3,200 students to attend religious or private schools this year.

The educational scholarship program, described as the nation’s broadest, has been supported by the Indiana Catholic Conference, the public policy arm of the state’s bishops.

The program was passed by the state Legislature in the spring. Since then, the state Education Department approved about 250 religious or private schools for the program, allowing them to enroll students who are given scholarship aid based on family income.

Families began applying for the program in July. The cutoff date is mid-September.

The program is currently being challenged in court by a group of teachers and religious leaders who claim it violates separation of church and state. A judge was expected to hear arguments Sept.1 about granting a possible injunction to block the program.
The program converts a portion of funds that would have gone to the public school system into a scholarship for use at a qualifying private school. Participation in the program is capped at 7,500 students this year and 15,000 the following year.

The voucher amount is for each eligible student in the family, and the voucher would be received for each year through a student’s senior year in high school. During an eligible student’s 12 years in Catholic schools, a family could receive more than $60,000 in voucher assistance from the state of Indiana to help pay for tuition, according to Indianapolis archdiocesan officials.

About 70 percent of the approved state vouchers are for students opting to attend Catholic schools, according to The Associated Press.

That number is not surprising to John Elcesser, executive director of the Indiana Non-Public Education Association, who said Catholic schools are receiving the bulk of voucher applicants because most of them already have state accreditation which some private schools do not have. The Catholic schools are also more established and have more space available.

In the Diocese of Evansville, school officials noted that official school enrollment would not take place until Oct. 1, but first day numbers indicated an increase in students in kindergarten through 12th grade as well as in preschool and pre-kindergarten programs.

“The diocesan theme for schools this year is ‘All Are Welcome,’ ” said Daryl Hagan, diocesan superintendent of schools, adding that the theme is particularly appropriate this year with the Indiana School Scholarships Act.

Hagan said the new law has ushered in “the most expansive school voucher program in the country and it allows parents to make an independent choice to find the best school to meet their child’s unique learning needs.”

According to figures provided by the State Department of Education and the diocesan schools office, 167 voucher students have chosen to enroll in a Catholic school in the Evansville Diocese, one of five dioceses in the state.

Hagan said interested families can still apply, noting that the Sept. 16 deadline is fast approaching. He said the diocesan schools office would assist applicants in determining eligibility and working through the application process.

Marie Williams, director of the Office for Education in the Lafayette Diocese, called the new school year “unique with new opportunities for some families to receive assistance” through the state scholarship program.

About 250 students in the diocese will be benefitting from the program, she said in a column in the Catholic Moment, diocesan newspaper. The diocese has 20 schools with a total enrollment of more than 5,300 students.

The Criterion, archdiocesan newspaper of Indianapolis, reported this summer that most of the 68 Catholic schools in the archdiocese were committed to participating in the state’s voucher program.

“Vouchers will not change the mission or purpose of our Catholic schools,” said Ron Costello, superintendent of Catholics schools in the Archdiocese of Indianapolis. “Parents who enroll students in our schools need to understand that we are Catholic first and schools second.”

In schools where vouchers are issued, he told Today’s Catholic, diocesan newspaper, there are no state restrictions on catechizing children, celebrating the sacraments or events linked to the liturgical calendar. Principals have the authority to admit and retain children based on existing admission rules and policies.

He also noted that the voucher program “could help Catholic schools sustain strong programs for many years.”

As a case in point, Sara Guth, principal of St. Bernard School in Rockport, said her school’s office has been inundated with calls about the vouchers from the day the legislation passed. The elementary school currently has 104 students.

Guth told reporters at a news conference about the voucher program that her prayer for the school’s enrollment to increase has been answered.