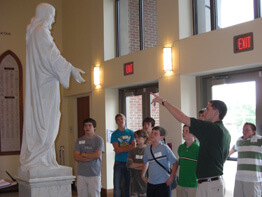 Twelve-year-old Daniel Cohn doesn’t dream about becoming a major league baseball player or a Hollywood movie star. His goal in life is to become a priest and minister with soldiers as a U.S. Army chaplain.

“I want to serve my country and preach about God,” said Daniel, a homeschooled parishioner of St. John the Evangelist, Severna Park. “I want to tell them they’re not there to kill, but to save lives and protect people.”
Daniel was one of 10 boys who attended “Operation Genesis,” a daylong vocations camp sponsored by the archdiocese June 26 at St. John, Westminster.

Designed to educate boys about the priesthood and religious life, the camp included talks by priests and seminarians. The boys, ranging in age from 12-14 , also prayed the rosary, recited the Liturgy of the Hours, attended Mass, enjoyed pizza and played a round of bocce ball. They represented seven parishes.

“Dare to Dream,” a vocation camp geared to older teens that had been scheduled for June 28, was canceled because only one teen signed up.

Father Gerard Francik, archdiocesan vocations director, encouraged the Operation Genesis campers to be open to the possibility that God might be calling them to the priesthood.

“Listen to people who you trust,” he said. “Sometimes they might see things in you that you don’t see in yourself. You might have gifts and talents that can be used as a priest.”

Father Francik said it’s important to pray about one’s vocation and to listen to God’s call.

Alex Kordell, a 14-year-old parishioner of St. Ignatius in Ijamsville, said it was fun to talk with people his own age about the priesthood. Many youths incorrectly assume that the religious life is restrictive and humorless, he said.
“The priests I know are fun,” the homeschooler explained. “They’re always interacting with other people.”

While he’s not sure he will become a priest, Alex said he’ll consider it.
“I’ve learned that you need silence to hear God’s call,” he said.

Father Francik told The Catholic Review Operation Genesis has been very effective in planting the seeds for future vocations. Two former campers are current seminarians and another is considering becoming a priest, he said.

Christopher Little, a 19-year-old former camper who now attends Providence College in Rhode Island as a college seminarian, returned to Operation Genesis as one of the leaders. He gave the boys a tour of St. John and explained the symbolism behind the statues and stained glass windows in his home parish.