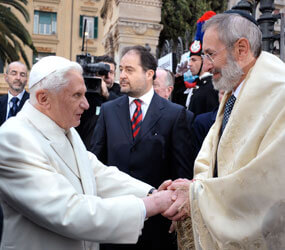 ROME – Laying a wreath at a memorial to Roman Jews rounded up by the Nazis in 1943 and joining in a standing ovation to a dwindling group of Holocaust survivors, Pope Benedict XVI broke the ice with Rome’s Jewish community even before he began to speak.

The pope made his first visit to Rome’s main synagogue Jan. 17, strongly affirming the Catholic Church’s commitment to improving Catholic-Jewish relations, its respect and appreciation for Jewish faith, its condemnation of anti-Semitism and his own hope that Catholics and Jews can work together to bring biblical values back to society.

Pope Benedict began by telling some 1,500 people packed into the synagogue that he came to “confirm and deepen” the dialogue and to demonstrate “the esteem and the affection which the bishop and the church of Rome, as well as the entire Catholic Church, have towards this community and all Jewish communities around the world.”

But he also responded to a widespread impression within the Jewish community, especially the community in Rome, that Pope Pius XII did not do enough to speak out against the Holocaust. Pope Benedict’s decision in December to advance the sainthood cause of Pope Pius led for calls within the Rome community for the visit to be cancelled and some people boycotted the meeting.

The pope said he could not come to the synagogue without remembering the Jews of Rome “who were snatched from their homes, before these very walls, and who with tremendous brutality were killed at Auschwitz.”

“How could one ever forget their faces, their names, their tears, the desperation faced by these men, women and children?” he asked.

While many people remained indifferent to Hitler’s attempt to exterminate the Jews, he said, “many, including Italian Catholics, sustained by their faith and by Christian teaching, reacted with courage, often at risk of their lives, opening their arms to assist the Jewish fugitives who were being hunted down, and earning perennial gratitude.”

Throughout the meeting, Holocaust survivors, wearing light and dark blue striped scarves, and their children wept at mentions of the Nazi attempt to exterminate the Jews.

Without mentioning Pope Pius by name, Pope Benedict told them, “the Apostolic See itself provided assistance, often in a hidden and discreet way.”

Welcoming the pope to the synagogue, Riccardo Pacifici, president of Rome’s Jewish Community, said the only reason he was born was because his father had been hidden by nuns in a convent in Florence, but many others were not so lucky.

“The weight of history is felt even at today’s event because there are wounds that are still open and cannot be ignored. For this reason, we also respect those who decided not to be here today,” he said.

Pacifici told the pope, “The silence of Pius XII during the Shoah is still painful today.”

If Pope Pius had spoken out more loudly, he said, “maybe he would not have been able to stop the death trains, but he would have sent a signal, a word of comfort, of human solidarity, for our brothers and sisters who were transported to the chimneys of Auschwitz.”

Rabbi Riccardo Di Segni, the chief rabbi of Rome, spoke about the responsibility of people of faith to protect God’s creation, starting with human life and human dignity.

“The silence of God or our own incapacity to hear his voice in the face of the world’s evils is an inscrutable mystery,” the rabbi said. “But the silence of man is on a different level; it makes us wonder, it challenges us, and it does not escape justice.”

The rabbi said that despite continuing tensions, Catholics and Jews must move forward in their dialogue.

All of the speakers mentioned Pope John Paul II’s visit to the synagogue in 1986 and every mention was met with clapping, but the longest applause came when Pope Benedict greeted the retired chief rabbi, 94-year-old Elio Toaff, who had hosted Pope John Paul’s visit.

In his speech, Pope Benedict said that “the closeness and spiritual fraternity” of Catholics and Jews flows from sharing the Hebrew Scriptures or Old Testament.

“It is in pondering her own mystery that the church, the People of God of the New Covenant, discovers her own profound bond with the Jews, who were chosen by the Lord before all others to receive his word,” he said.

Pope Benedict said the Ten Commandments are central to the values that Christians and Jews share with each other and must share with an increasingly secularized world.

Acknowledging one God as the creator of the universe, calling for respect for human life and upholding the dignity of the traditional family, the Ten Commandments are “a beacon and a norm of life in justice and love, a ‘great ethical code’ for all humanity,” he said.

The pope told his audience that while Christians and Jews pray to the same God, “they often remain unknown to each other. It is our duty, in response to God’s call, to strive to keep open the space for dialogue, for reciprocal respect, for growth in friendship, for a common witness in the face of the challenges of our time, which invite us to cooperate for the good of humanity in this world created by God.”

After the pope’s visit, Rabbi Di Segni told reporters, “I think the speech calmed the atmosphere,” which was tense after Pope Benedict advanced the cause of Pope Pius. “My first reaction is decisively positive,” the rabbi said.

Pacifici, the president of the Rome community, said, “I think he understood what we were saying.”

Renzo Gattegna, president of the Union of Italian Jewish Communities, told reporters that Catholics and Jews still have many issues to discuss and resolve, but the pope’s visit marked a strong step forward.

Anna Foa, a member of the community and a historian who regularly contributes articles to the Vatican newspaper, said, “I was very content. I think it went really well. I believe the pope’s speech marked an opening on several points,” including “the irrevocable nature” of the Jews’ covenant with God, the horror of the Holocaust and his firm commitment to the Second Vatican Council’s teaching of respect for the Jews.

“I think it was a speech filled with great openness and I hope it means it will be possible to leave behind us all these misunderstanding and these real differences, which exist on many points. But you engage in dialogue with people who disagree,” she said.