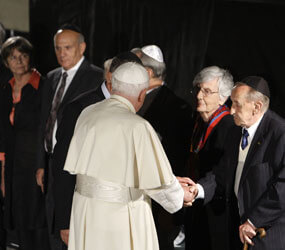 JERUSALEM – On his first day in Jerusalem, Pope Benedict XVI visited the Yad Vashem Holocaust memorial and said the suffering of Jews under the Nazi extermination campaign must “never be denied, belittled or forgotten.”

The pope called the Holocaust an atrocity that disgraced mankind, and said the church is committed to working tirelessly “to ensure that hatred will never reign in the hearts of men again.”

With his head bowed and his hands folded, the 82-year-old pope prayed silently before an eternal flame in the Hall of Remembrance, a stone monument to the 6 million Jews killed in World War II. He stood in the tent-shaped structure, where the names of some of the Nazi death camps are inscribed in the floor, as a prayer was recited for the victims, the resistance fighters and those who risked their lives to save Jews from the Nazis.

In a brief talk, Pope Benedict said he had come “to stand in silence before this monument, erected to honor the memory of the millions of Jews killed in the horrific tragedy of the Shoah.”

“They lost their lives, but they will never lose their names: These are indelibly etched in the hearts of their loved ones, their surviving fellow prisoners, and all those determined never to allow such an atrocity to disgrace mankind again,” he said.

Most of all, he said, their names are fixed in God’s memory.

“May the names of these victims never perish! May their suffering never be denied, belittled or forgotten! And may all people of good will remain vigilant in rooting out from the heart of man anything that could lead to tragedies such as this!” he said.

Pope Benedict’s May 11 visit to the memorial came after a period of Catholic-Jewish tension, following the pope’s lifting of the excommunication of a traditionalist bishop who publicly minimized the extent of the Holocaust. After sharp criticism from Jewish and other leaders, the pope reaffirmed his dedication to improving Catholic-Jewish ties.

Israela Hargil, 70, was one of six Holocaust survivors invited to meet the pope at the memorial and, although she said she is indebted to a Catholic for her survival, she also said she hesitated going to the papal event.

Hargil said she hesitated because the pope, as a boy, was a member of the Hitler Youth movement, an enrollment that he has said was obligatory. Hargil also said she was not happy about Pope Benedict welcoming back into the church Bishop Richard Williamson, a member of the Society of St. Pius X who had denied the extent of the Holocaust.

“The pope said (he) made a mistake (about Williamson) and that is a big thing,” she said, explaining why she finally decided to accept Yad Vashem’s invitation.

“I owe my life to Catholics and to the Poles who saved me,” said Hargil.

At Yad Vashem, the pope, who lived under the Nazi regime in his native Germany, did not analyze the specific causes of the Holocaust. Instead, he focused on the remembrance theme of the memorial.

“One can weave an insidious web of lies to convince others that certain groups are undeserving of respect. Yet, try as one might, one can never take away the name of a fellow human being,” he said.

And rather than remember his own personal experiences under Nazism, he made an effort to put himself in the place of the Jewish victims.

“I can only imagine the joyful expectation of their parents as they anxiously awaited the birth of their children. What name shall we give this child? What is to become of him or her?” the pope said.

“Who could have imagined that they would be condemned to such a deplorable fate!” he said.

“As we stand here in silence, their cry still echoes in our hearts. It is a cry raised against every act of injustice and violence. It is a perpetual reproach against the spilling of innocent blood,” he said.

The pope later signed the memorial’s visitors’ book with phrase from the Book of Lamentations, “His mercies are not spent.”

He quoted the scriptural passage at greater length in his talk, saying it was an important affirmation of trust in God that is full of significance for both Jews and Christians. “The favors of the Lord are not exhausted, his mercies are not spent; They are renewed each morning, so great is his faithfulness,” the passage began.

One of the survivors the pope met, 83-year-old Edward Mosberg, told reporters afterward that the meeting was very emotional.

“But I also told him he knows that the Holocaust happened and that as head of the Catholic Church His Holiness should condemn all denials,” he said.

Dan Landsberg, another survivor, said the ceremony and meeting with the pope was a very solemn occasion.

“I feel like the circle has been closed,” he said. “There is peace between us and the church. I think it is respectful for the pope to be here and to respect this place and its history.”

But at the same time, he said, he was disappointed “the pope did not mention the Nazi German perpetrators” of the Holocaust.

Hargil, the survivor who hesitated about meeting the pope, was accompanied to the ceremony by her 12-year-old granddaughter.

She told Catholic News Service that she was 4 years old and living in Brody, then part of Poland, in 1943 when the Catholic Miklaszewski family took her in. Hargil’s father had worked for Jacenty Miklaszewski, whom she described as “very religious.”

“He was … very straightforward … and took his faith very seriously. He lived his faith … and saved me and other (Jews) as well, including my father,” said Hargil.

The Miklaszewskis gave Hargil the Polish name of Ewa and introduced her as a niece whose parents had died in a bombing. Hargil’s mother had been tortured and killed by the Gestapo earlier, but her father stayed in hiding in a bunker in a nearby village.

Hargil attended a preschool run by Catholic nuns and recalls the Masses and Christmas celebrations as the only things of beauty in her life during the war years.

“Everything else was so gray and black and bad,” she said, fondly recalling the smell of the church incense and the beauty of the church.

Another survivor who met the pope at Yad Vashem was Ruth Bondy, a journalist, who said she was unsure how she would feel meeting the pope.

“I am not Catholic so I don’t feel the same emotions about meeting with him (as a Catholic would), but I know how to respect and appreciate his visit,” she said.

Bondy was born in Prague, in what was then Czechoslovakia, in 1923. After the German occupation in 1939 she was forced to work as a farm laborer. Later she was interned in the Nazi-run Terezin Ghetto and in 1943 was transported to Auschwitz-Birkenau. From there, she was sent to a number of work camps; when the camps were liberated, she was sick with typhus and weighed only 77 pounds.

Following her recovery she returned to Prague and, with the establishment of Israel in 1948, she immigrated.

Bondy has written numerous books and historical research works about the Holocaust period and Czech Jewry. She has won various awards for her writing and translation works.

Along with the survivors, Pope Benedict was introduced to Ivan Vranetic, 82, who said meeting the pope made him feel excited like a little boy. In 1970 Vranetic, a Catholic, was recognized by the Yad Vashem Holocaust Martyrs’ and Heroes’ Remembrance Authority with its “Righteous Among the Nations” award for helping hide Jewish refugees in his hometown of Topeka, Croatia, when he was 17 years old.