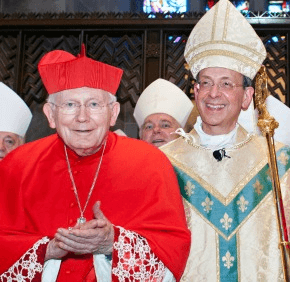 By George P. Matysek Jr.
gmatysek@CatholicReview.org
When St. John Paul II elevated then-Archbishop William H. Keeler to the rank of cardinal 20 years ago, the leader of the Archdiocese of Baltimore said the honor was conferred on the archdiocese and the greater Baltimore community.
“The Holy Father’s decision is recognition, I believe, of our whole community, our neighbors, all people of good will,” Cardinal Keeler said after the Oct. 30, 1994, announcement, “together with the great traditions of Baltimore and Maryland.”
On behalf of the archdiocese and the wider community, Archbishop William E. Lori was to recognize the 20th anniversary of Cardinal Keeler’s elevation to the College of Cardinals and the 35th anniversary of his episcopal ordination by celebrating a Mass and reception Nov. 20 at St. Martin’s Home for the Aged, the Catonsville residence where Cardinal Keeler lives.
The event was to be an opportunity to let the 83-year-old cardinal know “just how dearly we love him,” Archbishop Lori said in a Nov. 17 telephone interview with the Catholic Review.
“Cardinal Keeler was a visionary leader,” Archbishop Lori said. “He really appreciated and loved the history and heritage of the Archdiocese of Baltimore and saw how this heritage could pave the way for a strong future for the archdiocese.”
In leading the archdiocese from 1989 to 2007, Cardinal Keeler was recognized as an international leader in Catholic-Jewish, Catholic-Orthodox, ecumenical and interfaith relations. He was the driving force behind the restoration of the Basilica of the National Shrine of the Assumption of the Blessed Virgin Mary in Baltimore and the creation of the Pope John Paul II Prayer Garden near the basilica. He also hosted the first papal visit to Baltimore in 1995, during which St. John Paul II celebrated Mass at Oriole Park at Camden Yards.
“He forged relationships – ecumenical, interfaith and relationships with the wider church – all of which assisted and strengthened the archdiocese,” Archbishop Lori said.
Nationally, Cardinal Keeler served as vice president and then president of the U.S. Conference of Catholic Bishops. He initiated numerous programs in the Baltimore archdiocese, establishing what is now known as the Archbishop’s Annual Appeal. In 1997, he launched a major capital campaign known as Heritage of Hope that raised more than $137 million from more than 39,000 gifts and pledges. The cardinal also established the Partners in Excellence program, which provides tuition scholarships for children in city Catholic schools. Since its inception in 1996, the program has provided more than $26 million in tuition assistance.
“Partners in Excellence supports our community schools,” Archbishop Lori said.
Born in Texas and raised in Pennsylvania, Cardinal Keeler was named auxiliary bishop of Harrisburg, Pa., in 1979 and bishop of Harrisburg in 1983, a position he held until coming to Baltimore in 1989.
“He is truly a visionary and transformational leader,” Archbishop Lori said.
PrevNext