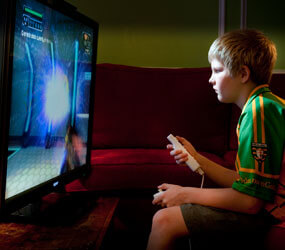 WASHINGTON – With a case involving violent video gaming set to get a hearing at the U.S. Supreme Court in the fall, psychologists and a priest-anthropologist talked to Catholic News Service about whether youths’ exposure to violent games should be cause for concern.

The case came about in 2005 when the Video Software Dealers Association sued to strike down a newly signed law that would require a label on games to flag violent content. The law made it illegal to sell violent video and computer games to youths under 18.

The association won its suit two years later when a federal judge granted a permanent injunction to the law. In response, the state of California filed an appeal with the 9th U.S. Circuit Court of Appeals, which upheld the lower court, and California asked the Supreme Court to review the ruling, which in April it agreed to do.

Hal Halpin, president of Entertainment Consumers Association, said that this might be the most important case gaming has faced.

“Gaming itself is at stake of being differentiated from entertainment media like music and movies,” Halpin told a reporter at Game Culture, a blog owned by the association.

In his message for World Communications Day in 2007, Pope Benedict XVI included video games as being among the media products that must keep human dignity intact.

“Any trend to produce programs and products – including animated films and video games – which in the name of entertainment exalt violence and portray anti-social behavior or the trivialization of human sexuality is a perversion, all the more repulsive when these programs are directed at children and adolescents,” Pope Benedict said.

Patrick Markey, an associate professor of psychology at Villanova University in Villanova, Pa., said that effects of video gaming depend on the person.

“It was never as simple as: This game is violent, thus it makes the person violent,” he told CNS. “It all depends on the dispositions of the individual.”

Markey, who has been conducting his research for about five years, said most studies tended to focus on the potential negative effects.

In a new study published this year in the Review of General Psychology, Markey found that the relationship between violent behavior in teens and the playing of violent video games isn’t as strong as many suspect.

“The vast majority of kids playing video games, of which there are many, don’t go on a murder rampage,” Markey said.

Instead, Markey describes the effect as one of a “dimmer switch,” meaning that the change from normal child to violent child is not abrupt and immediate.

Markey said his colleagues in their studies are making one big error: mixing up proxy aggression with real-world aggression.

“We just don’t know what people will do out in the real world. There isn’t a way to test that in the lab,” he said.

Michael Horne, a recent graduate from the Institute of the Psychological Sciences in Arlington, Va., who did his dissertation on video game violence, said that the history of violence in video games isn’t anything new.

“If you look at the history of violence in video games, I would say it started in ‘78 with the creation of ‘Space Invaders,’“ a classic arcade game, he said.

Since then, technology has made leaps and bounds to create the graphics of today, making games feel more realistic, Horne said.

Games popular with teens include “God of War,” “Grand Theft Auto” and “Gears of War,” all three of which are considered to be among the most violent video games created.

In his study, Horne focused on the relationship of video gaming and compassion, deciding not to single out violent video games.

He found a notable decrease of compassion and empathy in a person who has played a video game for at least 20 minutes.

The same results were found in violent video games and in popular social video games, such as Wii Play.

“These games don’t create a genuine and real encounter with a human person,” Horne said.

“As a Catholic, this is important in trying to understand how I as a person sees another ‘I,’“ he said; in other words, having the ability to see other human beings as actual beings, not a digital image.

In the end, Horne said that many in his study temporarily lost the ability to relate to people in a genuine way.

“I do think that there is a possibility that video games can cause a confusion between reality and fantasy,” he said.

Jesuit Father Richard Malloy, an assistant professor of cultural anthropology at Chestnut Hill College in Philadelphia, said that the effects of the media – video games being a part of this large branch – are still not well known.

“This is a really new reality in human culture, one we don’t understand yet,” he said.

Father Malloy, who has lived in the college’s campus dorms for the past seven years, has had a firsthand look at the effects of video gaming on youths.

“Some games tend to be extraordinarily violent and desensitizing,” he said.

Even so, Father Malloy said that video games won’t turn a nonviolent child into an aggressive child.

“What violent video games do is saturate young people’s consciousness with lots of violence, and I don’t know what that will do to us as a people and a culture,” he said.

Father Malloy said there could be a quick fix to the problems parents might be facing: Encourage young people to turn everything off once in a while.

“Some of this stuff is good, but it can’t become the 24/7 experience of a person’s life,” Father Malloy said.