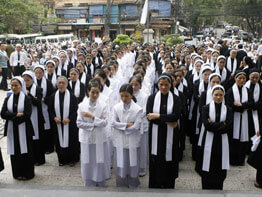 HANOI, Vietnam – Cardinal Paul Pham Dinh Tung, known for his leadership of Catholics in northern Vietnamese dioceses during difficult times, died at the age of 89.

Cardinal Tung’s funeral Mass is scheduled for Feb. 26 at the cathedral square and he will be buried in the cathedral, the archdiocese announced.

Pope Benedict XVI expressed his sadness over the death of Cardinal Tung and said he was united in prayer with the Archdiocese of Hanoi, the bishops of Vietnam, the relatives of the cardinal and all those touched by his death.

The pope called him “a distinguished pastor who, in difficult circumstances, served the church with great courage and great fidelity to the see of Peter, sacrificing himself with generosity to the announcement of the Gospel.”

During Cardinal Tung’s name-day celebration Jan. 25, 2008, Bishop Minh praised the cardinal for bravely witnessing to the Catholic faith by urging northern dioceses to remain faithful to the church during the 1960s, ’70s and ’80s, under communist rule and during the Vietnam War. The cardinal founded centers for people displaced by war.

Local church sources told UCA News the cardinal founded a religious society for women in the Bac Ninh Diocese in 1963 and a society for former seminarians in Hanoi in 1996. Both societies now have hundreds of members involved in evangelization.

Bishop Minh said the cardinal tried to strengthen Catholics’ faith by providing pastoral activities and devotion to Jesus and Mary and by bringing folk music into the liturgy.

Cardinal Tung was born in 1919 in the Phat Diem Diocese. He was ordained a priest in 1949. In 1963, he was ordained bishop of the Bac Ninh Diocese, which had been vacant for almost 10 years.

Later, after serving as apostolic administrator of the Hanoi Archdiocese for four years, he was appointed its archbishop in 1994. Pope John Paul II made him a cardinal that same year. From 1995 to 2001, Cardinal Tung headed the Vietnamese bishops’ conference. He retired as archbishop of Hanoi Feb. 19, 2005.

Cardinal Tung’s death leaves the College of Cardinals with 187 members, 115 of whom are under age 80 and therefore eligible to vote in a papal conclave.